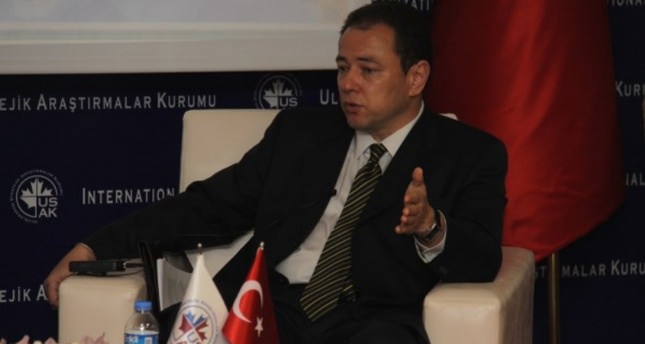 by Ali Ünal Jun 12, 2014 12:00 am
Ukraine's Ambassador to Turkey Sergiy Korsunsky said he expected four observers, including a Turkish citizen, from the OSCE, who went missing on May 26 near the eastern Ukrainian city of Donetsk, to be released soon.

Four observers from the Organization for Security and Cooperation in Europe (OSCE) who went missing on May 26 near the eastern Ukrainian city of Donetsk are still in the custody of pro-Russian separatists. However, Ukraine's Ambassador to Turkey Sergiy Korsunsky told Daily Sabah that the OSCE team is expected to be released in the coming days. "From the best of our knowledge all the captivated observers are still alive and their health is fine. As Ukraine we are working with OSCE officials to resolve this problem. I believe that they will be released very soon," the Ukrainian envoy remarked.

The observers are nationals of Estonia, Turkey, Switzerland and Denmark. The Turkish Ministry of Foreign Affairs (MFA) stated that it is also concerned about the capture of Turkish citizen Memet Kılıç. Moreover, the MFA have recently stated that Minister Ahmet Davutoğlu discussed the OSCE monitors with his Russian counterparts Sergei Lavrov, as well as Foreign Minister of Denmark Martin Lindegaard and Swiss Foreign Minister Didier Burkhalter. The ministry also announced that Turkey's Ukrainian Ambassador Ertuğrul Apakan, and the Permanent Representation of Turkey to the OSCE are all actively working for the release of all the observers being held hostage.

Ukraine's Turkey Envoy Sergiy Korsunsky also said that captive OSCE observes are being held in two separate groups. "They keep them as two groups in different locations. The group included Turkish observer currently being held at the headquarter near Donetsk. Those terrorists kept them as a guarantee in their headquarters to prevent a rescue operation," he added.

Meanwhile Kılıç's family is looking forward to his safe return. His brother Bünyamin Kılıç recently stated to Turkish media outlets that they were unable to communicate with him since he was taken captive but Turkish officials have told them his brother was fine. "Ukraine is preparing a new operation and this operation has to stop. We have access to information that they will not release my brother unless they stop operations," he said.

The OSCE's special observer mission is in the country at the request of the Ukrainian government, with the aim of de-escalating tensions between the opposing sides of the conflict and improving security. The observers are not only active in the east of Ukraine but are spread out in various parts of the country and publish regular reports on the security situation. They are unarmed, and have no military remit. The mission is supported by all 57 member states of the OSCE, including Russia.
RELATED TOPICS