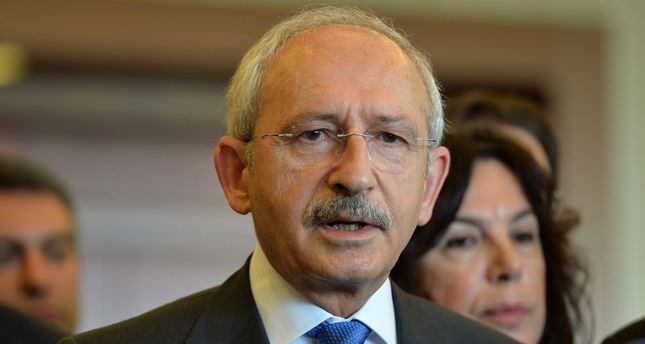 by Daily Sabah Jun 15, 2014 12:00 am
Main opposition Republican People's Party (CHP) leader Kemal Kılıçdaroğlu made striking remarks over the weekend about the upcoming presidential election to be held on August 10.

Speaking at a municipality mayors' meeting in the northwestern city of Eskişehir on Saturday, Kılıçdaroğlu signaled that the CHP would not nominate a presidential candidate from within the party, saying that the candidate to be announced by the CHP will not be the candidate of the party alone, but the entire nation. This statement by the CHP leader denied allegations that the opposition party will nominate former CHP leader and Antalya Deputy Deniz Baykal or CHP Eskişehir Mayor Yılmaz Büyükerşen as a presidential candidacy.

Kılıçdaroğlu also spoke at the "Great Compromise Meeting in Ankara" on Sunday and harshly criticized Prime Minister Recep Tayyip Erdoğan, who is expected to announce his candidacy for president, saying, "A country will not rule by force, but with common sense."
He added that the president to be elected should believe in the separation of powers and those who say that the judiciary and legislature are a hindrance should not be president.

"I believe that our [CHP] candidate will be accepted and supported by the entire nation," said Kılıçdaroğlu.