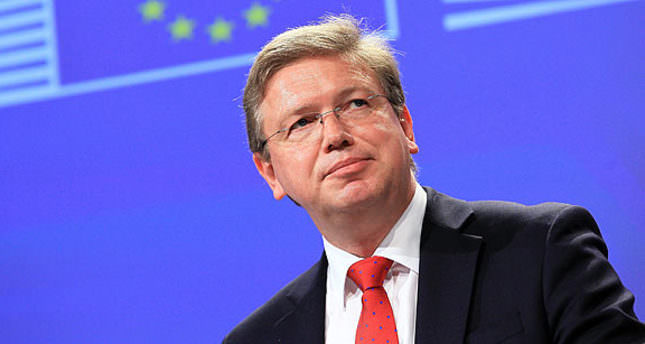 by Jun 17, 2014 12:00 am
EU's enlargement chief says that despite recent turbulence Turkey is willing to move reforms forward for its accession to the EU.

Stefan Füle, European Commissioner for Enlargement and Neighborhood Policy, said: "I have already witnessed a number of courageous and positive reforms implemented by Turkey."

He added: "Let's not undermine these efforts... Now we need to reaccelerate the process."

The Czech diplomat told a meeting attended by Turkish EU Minister Mevlüt Çavuşoğlu and Justice Minister Bekir Bozdağ he would report that Turkey is willing to move towards the reforms necessary to allow accession, despite recent disturbances that have raised questions about human rights.

Turkey continues to pursue EU membership and aims to open chapters 23 and 24 on "judiciary and fundamental rights" and "justice, freedom and security".

Negotiations began in 2005 and Turkey must comply with 35 negotiation chapters that set out reforms it must achieve to become a member. So far, only 14 chapters have been opened while 17 remain blocked.

Füle stressed that an independent and impartial judiciary and respect for fundamental rights are crucial for EU accession. These are areas in which Turkey has been criticized.

Çavuşoğlu said Turkey has been implementing reforms despite some chapters being blocked due to the dispute over Cyprus. He said: "If political blockades are removed, Turkey is ready to open chapter 23 for negotiations."

Referring to European Convention on Human Rights statistics, Çavuşoğlu highlighted improvements since 2012 when Turkey had the second highest number of human rights violations. The country is now in fifth place.

He criticized the EU for not acknowledging Turkey's progress; called on the EU to be objective, fair and result-oriented; and vowed Turkey would do its full share of work to meet all the EU criteria.

Bozdağ said Turkey has taken important steps on democratization and human rights and was determined to continue.

Citing amendments to the Supreme Board of Judges and Prosecutors (HSYK), Turkey's top judicial body, which has been strongly criticized by the opposition, Bozdağ admitted some "disruptions" but added: "From now on we will not allow such disruptions."

He also denied criticisms that the government did not consult with the EU while preparing amendments to the HSYK.