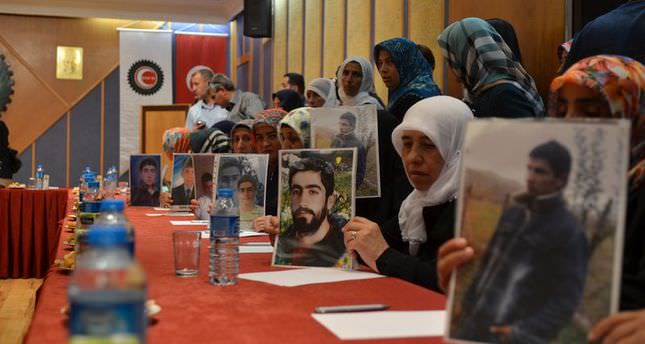 by Daily Sabah Jun 26, 2014 12:00 am
Kurdish mothers whose children have been abducted by the PKK have met with Nursel Aydoğan, a deputy of the People's Democratic Party (HDP) at the party's headquarters in Diyarbakır and criticized Aydoğan for his controversial remarks. The mothers attracted media attention after their sit-in demonstration in Diyarbakır, requesting the PKK to send their children back home.

Aydoğan claimed the children "joined" the PKK rather than being abducted and expressed this was not uncommon as hundreds of Kurdish children have for years joined the PKK to allegedly hold the government accountable for oppressing their families. "Our children were forced into joining the militants due to the persecution that their mothers and fathers faced while millions of children were able to attend school" Aydoğan asserted and said the children saw PKK as a haven.

The mothers backlashed at Aydoğan's statements and shouted that they want their children to attend school, not to join the militants, creating a tense atmosphere. In response to this, Aydoğan took a step back and tried to calm the families as he told them a bill package ensuring the resolution of this issue will be at the parliament's agenda while noting that it touched upon the return of such militants.

He expressed the law would ensure that the children would return home to their families while Erhan Eren, the spokesperson for the mothers expressed the mothers speeded up the reconciliation process with their determination and used the right methods to request the return of their children, which he claimed proved the fact that parties like the HDP were ineffective.