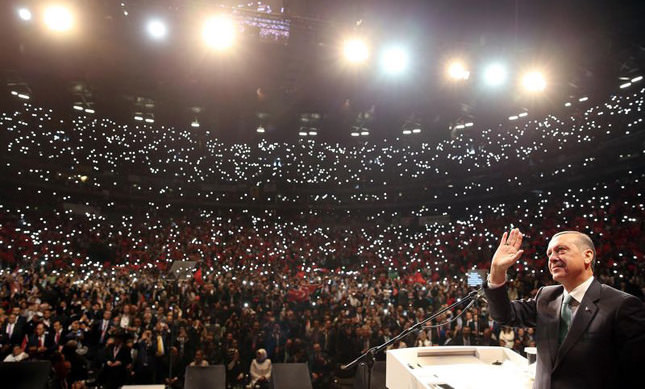 by Daily Sabah Jul 03, 2014 12:00 am
Turkish Prime Minister Recep Tayyip Erdoğan's nomination for the presidential election, the first to be decided by a popular vote, has huge media coverage across the world. Media channels around the globe reported the AK Party presidential candidate as breaking news.

On Tuesday, the ruling AK Party Deputy Chairman Mehmet Ali Şahin announced Erdoğan's nomination with a huge ceremony in which nearly 4,000 party members participated. Erdoğan made a historic speech amid AK Party members' chants and said it is not a farewell but a beginning.

The U.K.-based Financial Times reported that Erdoğan will run in his country's first direct presidential elections and portrayed the candidacy as a move his critics say will lead to greater authoritarianism but which his supporters argue will enfranchise ordinary people.

The daily also covered pollsters' prediction on the presidential race noting, "several recent opinion polls giving the prime minister more than 50 percent backing have confirmed his position as the overwhelming favorite for the election."

The British Broadcasting Corporation (BBC) covered Erdoğan's candidacy by saying that "The AK Party has won six consecutive elections, at national and local level, maintaining a solid base of support among the working class. Tuesday's announcement was greeted with loud applause by party members at a meeting in the capital, Ankara."

BBC highlighted that Erdoğan wants to give more power to the presidency seat, which has been a largely symbolic post for years.

"In power for 12 years, with his popularity seemingly unscathed by a year of sporadic anti-government protests and a corruption scandal, Mr. Erdogan is considered to be Turkey's most transformative political leader since the modern Republic's founder, Mustafa Kemal Atatürk," the daily noted.

The New York Times daily headlined its article with "Erdoğan, Survivor of Protests and Inquiries, to Seek Presidency in Turkey."

"In power now for more than a decade and already considered to be the most consequential political leader here since modern Turkey's founder, Mustafa Kemal Atatürk, capturing the presidency could allow Mr. Erdoğan, 60, eventually to surpass even Atatürk's legacy," wrote the daily.

The Daily Bild said on its website that Erdoğan eyed for the highest post of presidency in Turkey and that he continued to enjoy the strong backing of his supporters despite criticisms from the opposition for his "authoritarian style." It noted that the AK Party remains the strongest political force in Turkey, following its landslide victory in March 30 local elections.

German-based Deustche Welle said, "the long-expected announcement was made in front of thousands of his cheering supporters."

Touching on authoritarian concerns' by the opposition parties, the daily noted that Erdoğan is predicted to win the election in the first round without the need for a runoff scheduled two weeks later.

Germany's weekly Der Spiegel portrayed Erdoğan as the most likely winner of the upcoming elections. The magazine also covered Turkish research institution GENAR's prediction that Erdoğan could win the election in the first round. It noted that Erdoğan's main rival, the Republican People's Party (CHP) and Nationalist Movement Party's (MHP) joint candidate Ekmeleddin İhsanoğlu is considered to be less charismatic.

The Austrian daily Kurier said Erdoğan's candidacy was a long-awaited one and that he promised his voters "a new Turkey" with a strong economy and a firm stance on international platforms, if he takes the presidency post. The daily noted that Erdoğan will use the "Man of the Nation" slogan to promote his candidacy in Turkey and European countries where Turkish citizens reside.

Criticizing Erdoğan's policies for the last 12 years, a journalist at Kurier, Walter Friedl, touched on Erdoğan's life journey, which had ups and downs and portrayed him as "The Strong Man of the Bosporus."

French magazine Le Figaro reported Tuesday's announcement by saying that Erdoğan promised his supporters a "new era" in Turkey. The magazine underlined that pollsters showed Erdoğan as the winner of the upcoming election and this leaves almost no hope for the joint candidate İhsanoğlu.