PM Erdoğan: I didn’t fall from the sky; I worked my way from Istanbul mayor 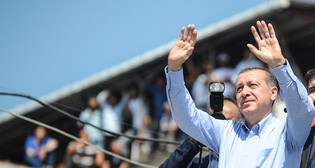 by Daily Sabah Jul 06, 2014 12:00 am
As Prime Minister Erdoğan attended an opening ceremony of the new municipal building in Samsun on Sunday, he informed a packed crowd that he did not fall from the sky in a basket; rather he worked his way from mayor of Istanbul, to the Prime Ministry, and now onto a possible seat in presidency.

Erdoğan was again emphasizing that he will not be inactive if elected unlike many of the former presidents of the country. The elected president will take an active role in drawing country's roadmap and added that he will not let the reconciliation process that is aimed to end the decades long conflict with the PKK to end.

Erdoğan also touched upon the International Monetary Fund asking $5 billion from Turkey. This came after Turkey paid off a $23.5 billion debt to the IMF in April 2013, and agreed to have a stand-by offer of $5 billion in credit to the fund if it required it for a "crisis".

Even though he is one of the most criticized leaders in Turkey's history, Erdoğan is considered as the most influential Turkish leader after the founder of Turkish Republic Mustafa Kemal Atatürk by the majority of public. Winning every election that he ran for in the 12 years of AK Party ruling term, Erdoğan's party displays a continuous increase in terms of his popularity amid Turkish citizens and AK Party grassroots trust in him.
Last Update: Jul 06, 2014 8:37 pm
RELATED TOPICS