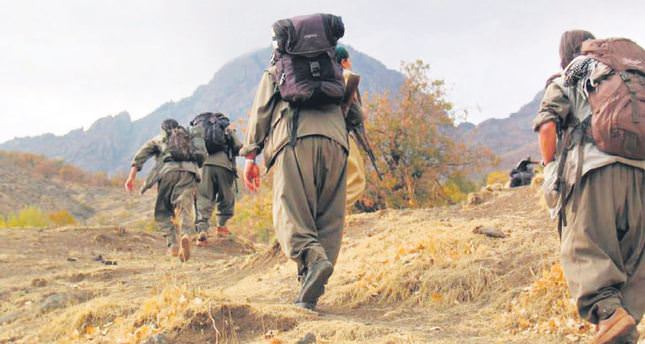 The government has prepared a roadmap, which includes political and legal steps to facilitate the return and integration of PKK militants, to be launched next year

The Turkish government has drawn a roadmap for the return of militants of the banned PKK, who took up arms against the Turkish state in order to carve out a separate state in southeastern Turkey. The roadmap includes the simultaneous evacuation of eight PKK camps and the terrorist organization's headquarters in the Qandil Mountains. PKK militants who were not involved in crimes can return to Turkey in one year and those who were sought with Red Notices in three years. The roadmap, which is to be put into practice in the upcoming year, aims to ensure the return of PKK militants who are in Europe and Northern Iraq. Also, the roadmap includes political steps and legal amendments to maintain social integration.

Following the approval of the draft bill to secure the reconciliation process between Ankara and Kurds that started in 2013 with Justice and Development Party (AK Party) initiatives, the government pressed the button to facilitate the return process. As a first step, the government is aiming to ensure PKK disarmament. It is reported that the disarmament criteria will be determined in accord with political and legal steps and that the process will be based on a timeline.

The second step is to prepare legal infrastructure for militants who will return to Turkey. Several amendments will be made as a part of related articles in the Turkish Penal Code. The roadmap further aims to include higher judicial bodies such as the Turkish Constitutional Court and Supreme Court of Appeals to the process.

The "Active Remorse Law" for militants who surrender to Turkish Security Forces (TSK) will see significant amendments in this regard. The next step is to return the PKK militants, whose numbers exceed 5,000.

The roadmap says that the militants who are not involved in crimes are expected to return to Turkey in one year while those who fled to European countries such as Germany or France and those who settled in northern Iraq can return to Turkey in two years. Considering social sensitivity, a different plan is on the table for PKK leaders such as the PKK's no. 2 man Murat Karayılan. It is asserted that those PKK leaders may take posts in the Kurdistan Regional Government (KRG).

An office is planned to open in Irbil, Iraq to coordinate the return of militants and a committee will also be established to hold talks with Europe's Kurdish diaspora that supports the reconciliation process.

The committee affiliated to the under secretariat of Public Order and Security of the Ministry of the Interior is expected to hold technical talks with Kurdish diaspora groups.

Those who live in PKK camps will need to return to Turkey voluntarily as they are officially regarded as refugees. Following the return of male PKK militants, the Interior Ministry and Justice Ministry are expected to take several steps to solve the male militants' military service issue. Children who were born in PKK camps, which are under the inspection of the U.N., will have Turkish citizenship. Returning militants will receive support from the Social Aid and Solidarity Support Fund. Committees in development agencies will prepare an economic program for those who want to set up their own business where they will be directed to the southeastern cities of Diyarbakır, Mardin and Batman.

As part of the reconciliation process and the roadmap, many campaigns will be held to protect social support. Nongovernmental organizations and human rights association will contribute to the process.

The draft bill also stipulates that if it is found necessary, officials will contact international agencies and experts. Universities across the country will also lend their support to the integration process.

Meanwhile, the pro-Kurdish People's Democratic Party (HDP) deputy co-chair and Muş Deputy Demir Çelik, who is responsible for local administration, highlighted seven demands to result in the disarmament of the PKK.

Çelik said, "The Kurdish nation should be recognized in the Turkish Constitution, the Counterterrorism Law, Election and Political Parties Law and the 10 percent electoral threshold should be abolished, political parties should receive support from the state treasury, local administrations should be administratively and economically autonomous and all these demands should be under legal assurance."

The accepted draft bill said that the reconciliation process is about putting weapons aside and choosing words, thoughts and politics. The draft bill stipulates that necessary steps in the fields of politics, socio-economy, psychology, culture and security will be taken to end the terrorist activities and uphold the social unity.

Through the bill, the government will appoint certain institutions or individuals to have a dialogue with Kurdish circles both in the country and abroad.
The legislation also makes it the government's responsibility to rehabilitate militants who lay down their weapons. The Turkish Parliament will convene on Tuesday and discuss a draft bill to rekindle a government initiative to end terrorism and improve minority rights. Last Friday, the Parliament's internal affairs commission approved the six-article bill titled "The Law to End Terrorism and Strengthen Social Integration." The government announced that due to the reform package, it will not end the legislative year on June 30 this year. Thus, the Parliament will work efficiently to pass the reform package to show its commitment to the process and bring hope to the families of children who were kidnapped by the PKK.
Last Update: Jul 08, 2014 11:41 am
RELATED TOPICS