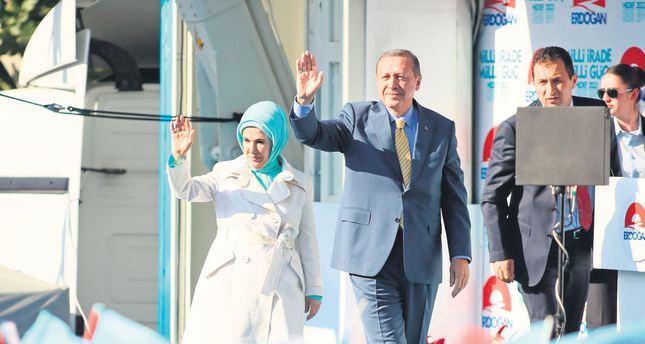 Prime Minister Tayyip Erdoğan said he will side with the people and support freedom during his presidency. He asked people to vote for him in huge numbers to ensure he will continue serving Turkey

Slamming the opposition Republican People's Party (CHP) and the Nationalist Movement Party (MHP) announcement of former Secretary-General of the Organization of Islamic Cooperation (OIC) Ekmeleddin İhsanoğlu, Erdoğan denounced the CHP and MHP coalition over the presidential election and added that the nation will give the opposition parties a lesson at the ballot box.

He noted that CHP was against electing the president by popular vote, as evident from its negative stance towards the amendments raised in parliament on the presidency election issue in previous years.

Touching on economic issues, social problems, bans and violations in "old Turkey," Erdoğan said that the nation decided to change its destination after electing the AK Party as the ruling party 12 years ago.

Referring to İhsanoğlu's remarks that he is not the candidate of one of the opposition parties, but an inclusive candidate for the sake of the nation, Erdoğan asserted that İhsanoğlu cannot say that he is the candidate of CHP because his father was expelled from Turkey due to CHP's policies years ago.