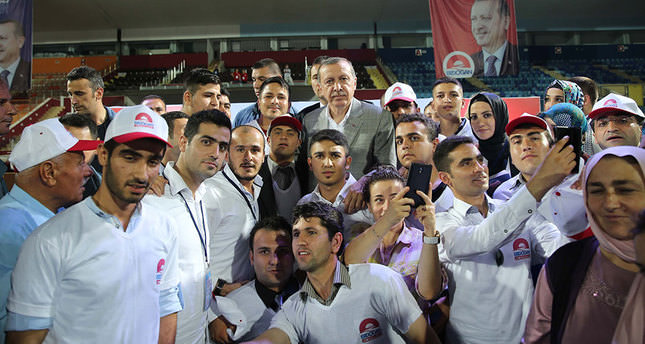 by Daily Sabah Jul 24, 2014 12:00 am
Within 48 hours, over 20,000 people applied to join the Volunteers Platform created on the official website of Turkish Prime Minister and presidential candidate, Recep Tayyip Erdoğan, for whom polls predict over 50 percent of the vote in the first round of the Aug. 10 election.

The website, rte.com.tr, contains detailed information on Erdoğan's biography, a documentary, his electoral rally schedule and news about the presidential election.

Erdoğan's presidential vision document titled "On the Way to the New Turkey" is also available on the website. The 84-page vision document has three headings: Democratic Administration, Public Prosperity and Leadership.

Most of the volunteers who applied for the platform are not affiliated with the ruling Justice and Development Party (AK Party), according to party officials. Volunteers are asked to share comments, distribute handouts, put up posters and visit voters to promote Erdoğan's candidacy. Erdoğan plans to meet with his volunteers in various regions throughout Turkey.

The first meeting is scheduled to take place during an iftar dinner held in the southern province of Adana on Wednesday. The public campaign for the position will continue until Aug. 9. If presidential candidates receive less than 50 percent of the vote, a second round will take place on Aug. 24.
Guests can also donate money for Erdoğan's bank account, opened for the electoral campaign, through the website and obtain the required information for donation.