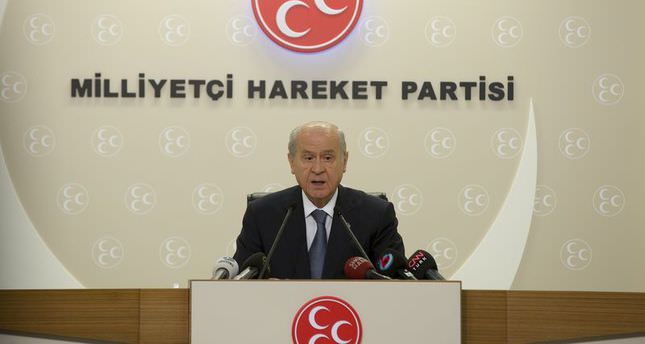 by Daily Sabah Jul 24, 2014 12:00 am
Devlet Bahçeli, the leader of the Nationalist Movement Party on Thursday at a press conference at his party's headquarters called on Fethullah Gülen, leader of the Gülen Movement who lives in rural Pennsylvania in a self-imposed exile, to return to Turkey.

"Dear Fethullah Gülen, come to Turkey and express that you will face the AK Party government" said Bahçeli, stating that he is ready to openly discuss everything.

Fethullah Gülen and his movement is allegedly behind the wiretapping of thousands of individuals including politicians, journalists, academics, NGO leaders and prominent figures through release of fabricated tape recordings and wiretapping encrypted phones belonging to top state officials through fabricated cases such as selam-tawhid and court orders given by Gülenist agents within state institutions. Most recently, over 100 Gülenist infiltrators within police forces have been arrested.