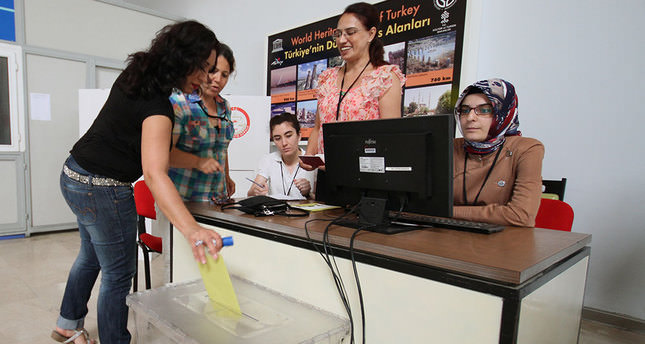 by AA Jul 26, 2014 12:00 am
The first votes in the Turkish Presidential election have begun to be lodged by Turkish nationals living overseas.

A total of 42 Turkish land, airport and harbor customs offices launched their polling services for Turks who are resident abroad but in Turkey at the time of voting at midnight on Friday, and will remain open until 5 p.m. local time in Turkey (14:00 GMT) on August 10 - the day voters in the country go to the polls to choose their first directly elected president.

Voters have to bring their national ID card, passport or other documents which show their ID number in order to be eligible to vote.

Turkish citizens go to the polls on August 10 to vote for the 12th president of the Republic of Turkey - the first time the country's president will be elected by popular vote.

The presidential post has previously been elected by assembly lawmakers.

The public campaign for the position will continue up until August 9.

Should none of the candidates take more than 50 per cent of the vote, a second round will take place on 24 August.