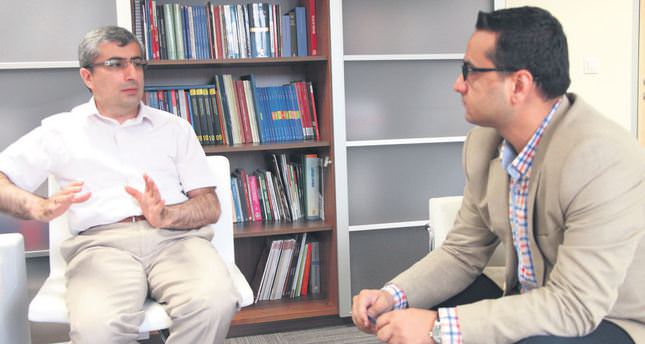 Turkish Parliament recently approved a bill giving a legal framework to the reconciliation process with the PKK, a step that will advance the settlement process aimed at ending the decades-long conflict with the PKK in Kurdish-populated southeast

In previous weeks, legislation passed by the Turkish Parliament provided the reconciliation process with a legal basis and gave hope to the future of the process. On the other hand, statements from AK Party MPs that compared the Kurdish question to the troubles in Northern Ireland, following meetings with Irish and northern Irish officials, aroused interest.

Daily Sabah sat down with Yılmaz Ensaroğlu, who has researched conflict resolution in many countries and is a veteran in the struggle for human rights, to discuss the current situation of the Kurdish question, how near the reconciliation process is to completion and its similarities and differences with other conflict resolution examples around the world.

What is the current status of the reconciliation process? Do you think that the process has moved forward?

Thus, with the initiative process in 2009, this problem started to be debated by every segment of society. After the interruption of the process, violence escalated until the end of 2012. However, at that time, it was revealed to both parties that it was impossible to solve the problem by weapons and military operations.

Therefore, the reconciliation process imposed itself on both parties. However, it is hard for the two sides, both of which were [engaged] in an armed struggle against each other, to solve the problem only by communication. Because of this, when the process began, there was distrust between the parties. Yet when we look at the year 2013, it can be seen that the parties were more trusting and determined to continue the process, even though there were attempts to sabotage or interrupt it. This is one of the most important indicators that the process has ripened.

The two political parties that get the Kurdish vote are the Peoples' Democratic Party (HDP) and AK Party. Due to the fact that they don't get votes from Kurdish voters and therefore have no fear of losing their votes, other opposition parties don't care much about the reconciliation process.

When I was in the southeast after the March 30 elections, I saw that both AK Party and Peace and Democracy Party (BDP) voters thought that the elections went smoothly, even though previous elections were tense. During the campaigning period, Turkish and Kurdish election campaigns were held without any security concerns in rural areas. I think that all of these are the indicators that we are observing an ongoing process that has ripened and is sincerely accepted by those involved.

There were meetings arranged by one of the leading institutions on conflict resolution, the Democratic Progress Institute (DPI), in countries such as the Republic of South Africa, Ireland, the United Kingdom, Germany, and Turkey, some of which you attended. Regarding the reconciliation process from the perspective of conflict resolution, what are the similarities and differences between the Kurdish question and other examples around the world?

Actually, every conflict is unique, and they do not resemble each other much, regarding those involved and their developments. It is important not to forget this fact. The fundamental aim of DPI's Turkey program was to find an answer to the question of how to prepare NGOs, politicians and media for the reconciliation process. The aim of these meetings, which included foreign participants as well, was to bring Turks involved with the reconciliation process together with the foreign ones, in order to contribute by exchanging ideas.

In this context, committees consisting of 15 to 20 people, including MPs, NGO representatives, and journalists attended the meetings held in England, Ireland, Scotland, South Africa, Spain, and Germany. The Kurdish question and the reconciliation process was not a subject of these meetings. Instead, the goal was to learn from the experience of the country that hosted the meeting.

For example, in Ireland we had the chance hear about the experiences of participants in the Good Friday Agreement, which was signed between Northern Ireland, Ireland, and England in 1998, a delegate of Tony Blair, Jonathan Powell, Ireland's president at that time, Bertie Ahern, Sinn Fein's leader Gerry Adams and some people from the Irish Republican Army (IRA). During the visit to South Africa, we came together with the former apartheid administration and Mandela's close working friends to learn from their experiences. Later we were in Germany in the context of central-local administration relationships and consolidating local administrations.

In the meetings, we observed that MPs were having a hard time asking questions when all of the MPs of other parties were present. Because of this situation, we arranged separate meetings for HDP, Republican People's Party (CHP) and AK Party MPs. In the following months, meetings are planned to be held in the Philippines, Colombia and Sri Lanka in order to learn from their experiences as well.

After these meetings, can you assess which example has similarities with the Kurdish question?

As human rights advocates, mostly we see the glass half empty, however, regarding conflict resolution, it is important to see the glass half full, because it is only possible to further the reconciliation process with a positive outlook.

In the reconciliation process in Turkey, there are two important actors: Prime Minister Erdoğan and Abdullah Öcalan. Were the other examples of conflict resolution shaped also by prominent actors?

It can be seen that most developments occur when an influential leader is willing to accomplish conflict resolution. When visiting South Africa, I saw that black South Africans were in pain socially, however, because of Mandela's faith and endurance regarding reconciliation the possible bloodshed was prevented.

Therefore, if there had not been an influential leader such as Mandela, South African reconciliation would not have been the same. On the other hand, after some point in the reconciliation process, leaders become irrelevant.

How did other conflict resolutions overcome interruptions?

When reconciliation processes start to gain ground, they are mostly sabotaged by internal and external actors that interrupt the process. For example, secretary of state for Northern Ireland in the Blair government, Mo Mowlam, in her memoir, "Momentum," explains that after striking a deal and thinking that she could get a good night's sleep, she was interrupted with the news of IRA attacks, which turned a hopeful night into a terrifying one. It is possible to read many stories like this from the memoirs of people involved.

It is really challenging to get rid of distrust after these kinds of interferences. However, they have managed to continue the process with dialog and time.

What do you think will happen in the following stages? How will the process proceed?

We don't know the plans regarding dates yet, neither the government's nor the PKK's. However, when we look at what should be done, I can state that this problem is affiliated with human rights and personal freedoms, and there is much to do in these fields. Still, there are many constitutional and legal regulations that may prevent the reconciliation process from proceeding.

From national education to village law or settlement law, it can be seen that most of the legislation is based on ethnic identity. Constitutional clauses such as describing citizenship on the basis of being Turkish, stating that no other language except Turkish can be taught to the citizens of the Republic of Turkey, and the one that foresees central administration are examples to this situation. However, without legal regulations, through precept and administrative practice, there are many things that can be achieved. By applying these regulations, the reconciliation process will transcend actors and may become permanent.

On the other hand, this problem has another dimension regarding violence and armaments. This armed organization must be transformed and integrated into political and social life. To achieve this, armed people must lay down arms and rejoin society. Due to this, I think the most important item on the agenda is to bring the members of the organization in the field, jails and abroad back into social life. It is an arduous process that requires mutual trust and time; however, I think it can be achieved. After one and a half years of gains, nobody wants the process to deteriorate.

The approval of the legislation that provides the reconciliation process with a legal basis is a crowning achievement for the process. While the process was led by the AK Party, Parliament has surfaced as a supporting force with the passing of the law.

I think that the reconciliation process will be sped up and continue in a more determined manner after the presidential election.
Who is Yılmaz Ensaroğlu?

Yılmaz Ensaroğlu graduated from the Faculty of Theology of Ankara University.

He has joined various social movements since high school and served as the director of student associations. In 1992, he was elected as a member of the executive board of the Association of Human Rights and Solidarity for Oppressed People (MAZLUMDER). Between 1996 and 2004 he was the president of MAZLUMDER.

During the 2005/06 academic year, he conducted research on human rights and security at Durham University in the U.K. and took part in the Turkish Economic and Social Studies Foundation's (TESEV) research on security sector reform. He is currently working as the director of the Law and Human Rights Department of the Politics, Economy and Society Research Foundation (SETA). He is the author of the book, "Tamamlanmamış Bir Değer: İnsan Hakları" (An Unfinished Concept: Human Rights). He has written many articles for books, journals and newspapers on human rights, civil society, democratization, security sector reform, civil-military relations, coups, freedom of religion, secularism, the Kurdish question and hate crimes, among others.
Last Update: Jul 28, 2014 1:03 am
RELATED TOPICS