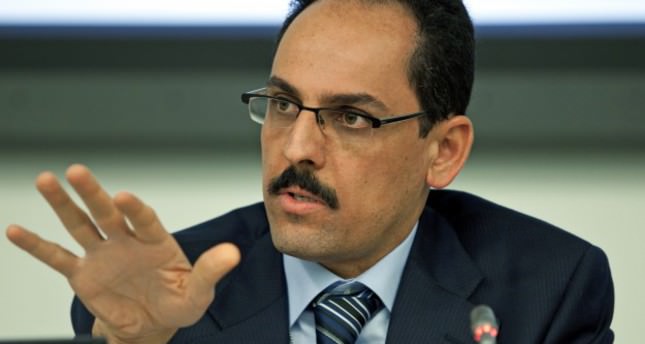 by Daily Sabah Aug 07, 2014 12:00 am
Prime Minister and presidential candidate Recep Tayyip Erdoğan's chief advisor İbrahim Kalın in a televised interview made notable statements about Erdoğan's remarks regarding Turkey's Armenian minority, claiming that Erdoğan's statements have been taken out of context by many.

"Erdoğan's remarks have wrongly been taken out of context" said Kalın, who explained that Erdoğan meant to refer to the degrading expression of "Armenian seed" which is used to insult and humiliate someone but he could only say 'Armenian' as the proceeding word is considered to be obscene and racist. According to Kalın, Erdoğan tried to emphasize the prejudicial and intolerant atmosphere in Turkey where minorities were not only being discriminated against but also ridiculed and insulted for being from a different background.

"A huge misconception and manipulation is evident" said Kalın, who stated that certain groups in the U.S. are trying to exploit his statements for a smear campaign against Turkey. On the other hand, Kalın added that the Turkish government has taken unprecedented steps to improve democratic standards for its Armenian citizens. For instance, Erdoğan has recently expressed his condolences over the World War I massacre of Armenians, which he called "our shared pain," a move which that was greatly appreciated by the Armenian minority in Turkey.

On the other hand, the AK Party is in the process of returning the properties of Armenian foundations in Turkey, a move also welcomed by the Armenians in Turkey, with some representatives claiming them to be "positive developments." Likewise, others have expressed that they finally "got to breathe thanks to the AK Party" and acknowledge the fact that change cannot occur overnight and that changing people's perceptions is a continuous process.

Erdoğan has complained about the opposition's efforts to discredit him by saying Erdoğan was from a different ethnicity in a recent televised interview, which sparked outrage as his statements were taken out of context.