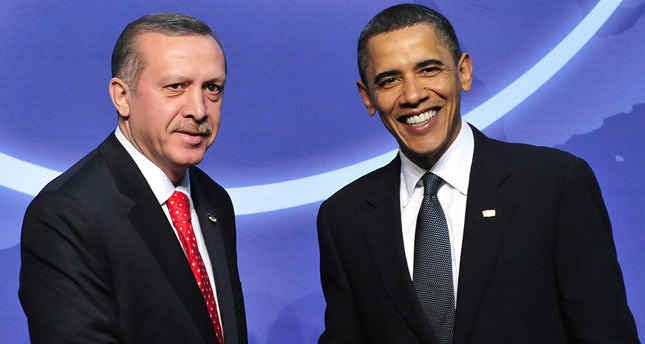 Following President-elect Recep Tayyip Erdoğan's election victory, relations between the U.S. and Turkey have entered a new era as the two global players look to solve the troubles in the region as well as the issues that have soured the relationship between the two allies. U.S. President Barrack Obama called Erdoğan on Tuesday to congratulate him over his presidential victory, in which he become the first directly elected president of the Turkish Republic.

The two leaders will have the chance to discuss the bilateral issues when they meet on three different occasions in the next two months. They will first meet at the NATO Summit of Heads of State and Government in Newport, Wales, Sept. 5, later at the U.N. General Assembly in New York and finally at the G-20 summit in Australia. "President Obama looks forward to working with Prime Minister Erdoğan in his new role and with whomever succeeds him as the next prime minister," White House national security spokeswoman Caitlin Hayden said on Monday.

Deputy State Department spokeswoman Marie Harf also said: "We congratulate the people of Turkey and President-elect Erdoğan on this first direct popular election of a president. We also congratulate the two other candidates who fought a hardfought race." Touching on the Organization for Security and Cooperation in Europe's (OSCE) monitoring of the election, she said monitors reported that candidates were generally able to freely campaign and that freedoms of association and assembly were respected. Congratulations have been flooding in since Monday, after Erdoğan won 51.79 percent of the votes, according to Turkey's Supreme Election Board (YSK), and was elected to a five-year term as president in the country's first directly elected presidential poll.

Ekmeleddin İhsanoğlu, the joint candidate of Turkey's two largest opposition parties, received 38.44 percent of the vote, and Selahattin Demirtaş, candidate of the People's Democratic Party (HDP), won 9.76 percent. The presidential election, sandwiched between March's local election and the forthcoming general election in June, was the first presidential poll to be decided by popular vote, in which the turnout was 74.12 percent.
Last Update: Aug 13, 2014 9:31 am
RELATED TOPICS