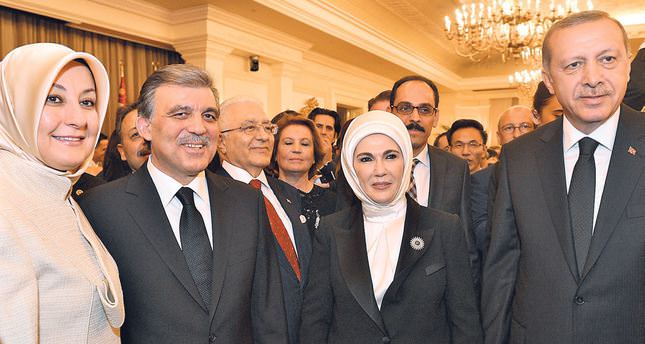 President-elect Recep Tayyip Erdoğan, at the farewell reception hosted by outgoing President Gül, said the new AK Party leader, who should also be the new prime minister, should continue the fight against Gülenists who infiltrated state institutions and tried to topple the government, foster party unity, protect the principles the party stands for and take steps to carry the AK Party into the future.

While Abdullah Gül, the 11th Turkish president, is getting ready to hand over his post to Prime Minister and President-elect Recep Tayyip Erdoğan on Aug. 28, Erdoğan drew a roadmap, including a five point criteria for the Justice and Development Party (AK Party) chairman and prime minister to be elected on Aug. 27. The criteria include important steps to combat the Gülen Movement which is believed to have carried out a defamation campaign with the Dec. 17 and Dec. 25 operations against the government ahead of the March 30 local elections, continue the reconciliation process to end the terrorist activities of the PKK, which took up arms against the Turkish state in order to create a separate state in southeastern Turkey, and build a new constitution.

Several Turkish media outlets alleged that AK Party MKYK members suggested names for the prime ministry post during their meeting. It is reported that Erdoğan gives priority to renovation and institutionalization for the party, but the ultimate decision will be made after consultation meetings with provincial chairmen, mayors and deputies to avoid any possible dilemma within the party.

Erdoğan also warned those who tried to cause a stir within AK Party and stated that the real chaos is within the Republican People's Party (CHP) and Nationalist Movement Party (MHP). Noting that they have always ensured unity within the party, Erdoğan said that AK Party officials would
continue to be unified for the future.
Last Update: Aug 14, 2014 6:09 pm
RELATED TOPICS