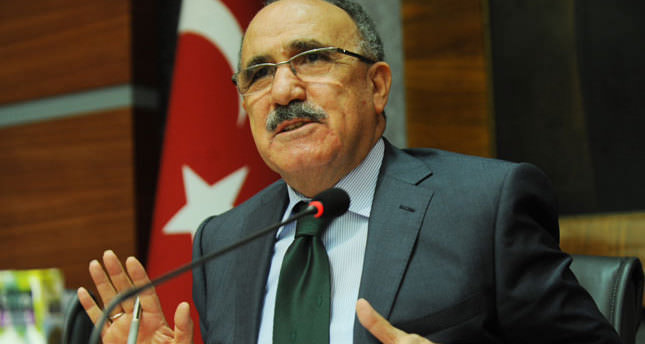 by Daily Sabah Aug 15, 2014 12:00 am
Speaking to the press ahead of the Justice and Development Party's (AK Party) extended meeting of provincial branch heads, Deputy Prime Minister Beşir Atalay stated that the reconciliation process, which aims to disarm the PKK and end the decades-long conflict in southeast Turkey, is rapidly developing and the government intends to complete the roadmap for the process by September. Atalay said government officials held a meeting with a delegation from the pro-Kurdish People's Democratic Party (HDP) and is working toward completion of a roadmap that President-elect Recep Tayyip Erdoğan promises to continue more effectively during his presidency.

"We're working efficiently toward drafting a roadmap for the reconciliation process. Our friends [officials] are also having talks with the PKK and İmrali [the island where PKK leader Abdullah Öcalan is imprisoned]. We [the government] will finalize the roadmap and then will share it with all the institutions of state. We will also share it with the other side [the HDP] too. This is a difficult process and I personally think this process will hopefully be completed by September."

The Turkish Parliament recently passed a bill that gives its peace process with the PKK a legal framework, which is a step that will advance the reconciliation process.

The bill, described by jailed PKK leader Abdullah Öcalan as "historic," is the first time Turkey officially announced that it wants the PKK to lay down its arms and militants to rejoin their families. The reconciliation process is about putting weapons aside and choosing words, thoughts and politics, the bill said.

The government has initiated the reconciliation process in efforts to resolve the issue and talks between the government and Öcalan have proved effective with a cease-fire declared in March 2013 as they have ended a 30-year-old insurgency which has killed over 40,000 people.

Many claim the reconciliation process has been productive as more people are aware of the fact that peace is attainable and the country's population turns a blind eye to all attempts that try to sabotage the process, which was evident when a provocateur tried to bring down a Turkish flag in Diyarbakır. Although it did not stir violence, it showed that everyone was serious and eager about establishing peace.
Last Update: Aug 15, 2014 1:34 am
RELATED TOPICS