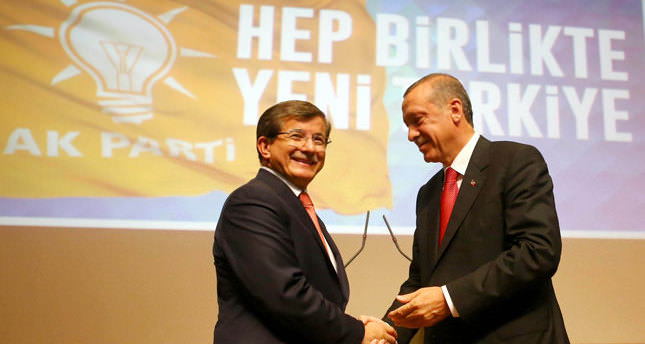 Davutoğlu, the AK Party leadership's nominee for chairmanship, received support from the party's rank and file as he readies to take over the reins of both the party and cabinet from President-elect Erdoğan

The Justice and Development Party's (AK Party) Central Executive Board (MYK) announced on Thursday that Foreign Minister Ahmet Davutoğlu would be their nominee for party chairmanship and prime minister as President-elect Recep Tayyip Erdoğan's successor was followed on Friday with significant support from senior member and party rank and file.

The AK Party will hold an extraordinary party congress on Aug. 27 to elect the new chairman, a day before Erdoğan is sworn in as the country's new president. Key AK Party figures voiced their support for Davutoğlu as the candidate for chairman. Organizing a press conference, former Transportation Minister Binali Yıldırım, whose name was among the possible chairmanship candidates, said that Turkey entered a new era with the Aug. 10 presidential election and that the main objective in this new process is to improve democracy on the road to a "new" Turkey. Dismissing opposition parties' allegations of tension within the party due to the chairmanship race, Yıldırım said there would never be a "leadership conflict" in the party.

"As the AK Party group, we have 313 deputies [in Parliament]. All of our friends [deputies] have the capacity to be the party chair. There will be no leadership conflict among us. We reach the best outcome through consultations and AK Party principles," said Yıldırım, adding that even though certain circles are in expectation of contradictory statements regarding Davutoğlu's candidacy, there is the principle of "us, not me" in the AK Party.
When asked whether he would accept a post in the cabinet, Yıldırım, who was the AK Party's İzmir mayoral candidate in the March 30 local elections, but lost against CHP mayoral candidate Aziz Kacaoğlu, said that being part of the AK Party is as honorable as being prime minister and that according to him, politics means serving the country.

AK Party Vice Chairman Mehmet Ali Şahin remarked on Davutoğlu's candidacy and said that even though the candidacy and election process in ruling parties may be chaotic and tension may increase during the congress, the AK Party carried out a policy that will be a model for all ruling parties through effective consultation. "The AK Party serves the nation. The AK Party solves citizens' problems. We have succeeded on this issue for the last 12 years. If we had failed, the nation would not have supported us by increasing our votes in every election that we ran in," said Şahin, asserting that under the leadership of Prime Minister of Davutoğlu, the AK Party will continue to serve the nation by increasing its tempo.
Turkish EU Minister and chief negotiator Mevlüt Çavuşoğlu said that Davutoğlu deserved this post: "There are criteria for the Prime Ministry and party chair candidacy.

Foreign Minister and Konya Deputy Ahmet Davutoğlu was announced as our [AK Party] candidate. Not only because he is my friend, but also because his service to AK Party principles, Davutoğlu deserves this post. We will be his supporter and side with him." Regarding allegations that Çavuşoğlu may take the post of foreign minister, he gave the green light and said that he always tries his best to do his duties in the AK Party without any ambition of power.

Commenting on speculation that there is a conflict within the AK Party, Interior Minister Efkan Ala dismissed the speculation and said that the AK Party displays well organized process management. Congratulating Davutoğlu for his candidacy, Deputy Prime Minister Emrullah İşler said that all AK Party members would do their best to contribute to the party's success. "We [the AK Party] know that Turkey's stability is ensured only with the AK Party's stability. We know that the nation may pay the price of any problem in the AK Party. That is why we will continue to successfully manage every process, and we never let the nation pay the price."

İşler said that the AK Party gives priority to consultation and Davutoğlu's name was at the forefront of all consultation meetings. "Since 2002, we [AK Party] have been trying to build a 'new Turkey.' We will continue to do so. We will do our best for our 2023 vision," added İşler.

Reiterating the government's sentiments, İşler said that combating the Gülen Movement, which is believed to have infiltrated the police and judiciary with the goal of overthrowing the government, and efforts to finalize the reconciliation process between Ankara and Kurds that started with an AK Party initiative, would continue under the leadership of the upcoming prime minister.
Last Update: Aug 24, 2014 3:20 pm
RELATED TOPICS