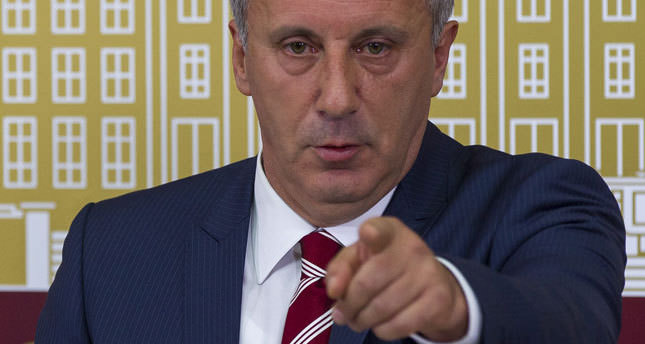 by Daily Sabah Aug 25, 2014 12:00 am
Following the Republican People's Party's (CHP) defeat in the Aug. 10 presidential election, the nomination of Ekmeleddin İhsanoğlu has sparked fury within the party. As the CHP head to an extraordinary party congress to elect its party leader on Sept. 5-6, party chair candidate and Yalova Deputy Muharrem İnce laid down the gauntlet to Kemal Kılıçdaroğlu and pledged to take the CHP back to its leftist roots. İnce said, "This party [CHP] will remember leftism, this party will remember revolutionist and Kemalist roots. It does not matter who wins in the extraordinary congress, it matters who wins the elections. If I do not turn the CHP into the winning party in the upcoming two elections, I will resign from my post immediately."

Also, İnce accused Kılıçdaroğlu of using all means at his disposal within the party while İnce has been racing for the party chairmanship on his own. "You [Kılıçdaroğlu] should be a democrat first," said İnce, accusing Kılıçdaroğlu of calling CHP members to vote for him using the party phone, making the party pay the bill for his calls. According to Objective Research Center's (ORC) survey on 1,250 CHP voters, that was held between Aug. 19-21, 40 percent of voters stated that they would like to see İnce as the CHP chairman, while 38.8 percent wanted Kılıçdaroğlu to continue to chair the party. Only 9.5 percent of voters stated that another CHP member should take the party chair. When asked whether the voters support Kılıçdaroğlu's nominee, who has a right-wing background, 76 percent said that they do not support Kılıçdaroğlu on this issue, while 24 percent said they support him. A whopping 66.1 percent of voters said that they would continue to vote for the main opposition CHP if Kılıçdaroğlu protects his seat at the extraordinary party congress whereas 20 percent begged to differ, while 13.9 percent of the surveyed CHP voters refrained from commenting on the issue. A heated race between İnce and Kılıçdaroğlu is expected in September's congress as predicted by the poll. The chances of Kılıçdaroglu remaining as leader and chairman of the party still seems a lot stronger as 78 out of 81 CHP provincial chairmen declared their support for him ahead of the convention.