Erdoğan greeted by crowd in Istanbul 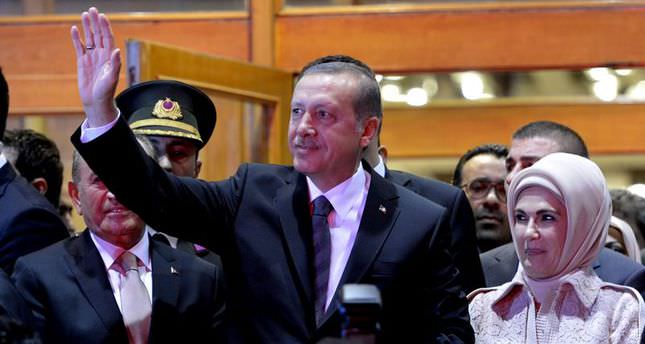 by Daily Sabah Aug 31, 2014 12:00 am
President Recep Tayyip Erdoğan,following the August 30 Victory Day reception, made a press statement in Istanbul where he was greeted by a crowd and stated that Istanbul has a special place in his heart, while he made important remarks about the reception.

Emphasizing the significance of the national will which was expressed by the people on August 10 in the presidential elections, Erdoğan stated that his election has positive implications for Turkey's future.

"My love for Istanbul is very different" said Erdoğan, who will reside in Ankara, Turkey's capital from now on as the president. "I grew up in this city and entered politics here, and achieved many milestones" said Erdoğan, who has previously bequeathed to be buried in Istanbul when he dies.

Erdoğan stated that he will be visiting the Turkish Republic of Northern Cyprus on Monday, Azerbaijan on Tuesday and will proceed to the NATO Summit following his visit. He noted that they will be participating at the United Nations General Assembly by the end of September and expressed that Turkey is now able to determine its own destiny. He expressed that the GDP of Turkey has surpassed $11,000 and they now aim to reach $25,000 and they will continue to ensure better living standards for the people of the Turkish Republic.

Recep Tayyip Erdoğan was elected as the president and succeeded Abdullah Gül on Aug. 10 with 52% of the votes and is the first popularly elected president of Turkey.