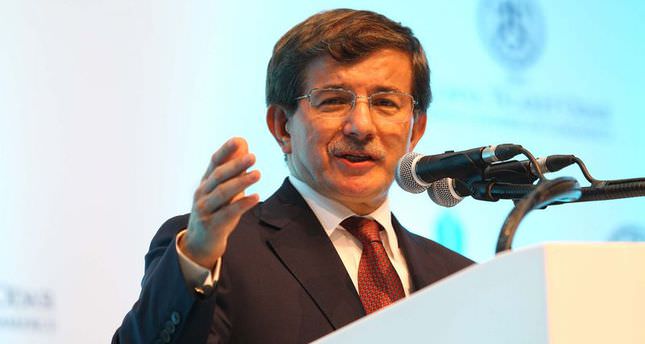 by Daily Sabah Sep 08, 2014 12:00 am
Prime Minister Ahmet Davutoğlu made a statement on Sunday about Fethullah Gülen's extradition from the U.S., stating that recent investigations brought new documents about, and if there was an effort to influence politics in Turkey, it was natural to stop this effort and request the extradition of the related parties.

After newly sworn in Turkish President Erdoğan requested from his American counterpart Obama, during the NATO summit last week, that the controversial U.S.-based imam Gülen residing in a self-imposed exile in rural Pennsylvania be deported or sent back to Turkey, PM Davutoğlu told Turkish reporters, "If there is an organization trying to overthrow the legitimate authority in Turkey established through democracy -- and there is -- and if this organization has connections with someone residing in Pennsylvania, then we have of course the right to make demands from the U.S. for termination of these illegal activities."

"If someone abroad is undertaking activities to shape the politics in Turkey, then that person's legal standing takes on a different structure," stated Davutoğlu. "He then becomes part of political operations and leader of that organization," continued PM Davutoğlu.

"In that case, the circumstances do change. We have the right to ask these steps be taken, accordingly, Turkey's demand for Gülen's deportation is legitimate," Davutoğlu told the reporters.

The Gülen Movement is accused of wiretapping thousands of people including Turkish government officials and encrypted phones, with the help of affiliated members of law enforcement, public prosecutors and judges. Gülen's followers are believed to have orchestrated a corruption probe against Erdoğan and his inner circle, which emerged last December, in order to overthrow the government.

Erdoğan and the senior government officials conveyed the espionage activities of the movement in Turkey to U.S. officials during the NATO summit, which was held last week in Wales, U.K.

The government's judicial process against the Gülen Movement has taken on a different dimension, Davutoğlu said. "The circumstances are not the same as they were two or three months ago," he said. The government acquired further proof through recent operations and other investigations that support the illegal nature of the movement's activities, according to Davutoğlu. "Steps will be taken in connection with the current legal process," he said.