Every support against ISIS short of armed engagement 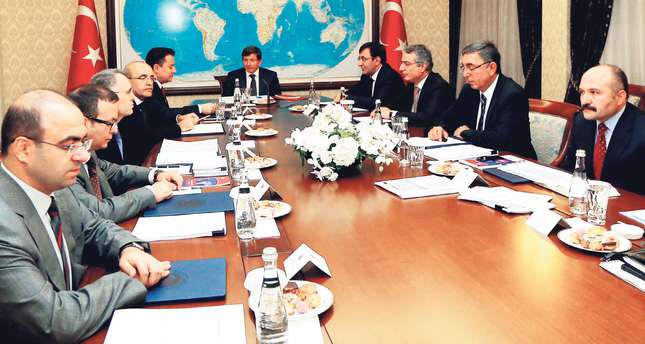 NATO member Turkey is pledging its support for the growing anti-ISIS coalition, but will not take part in military action as 49 of its citizens have been held hostage by the terrorist group for three months

After days of holding meetings behind closed doors, Turkish officials have reportedly decided to provide support to the growing anti-Islamic State of Iraq and al-Sham (ISIS) coalition, including intelligence, humanitarian and security assistance. However, Turkey will not engage in active military activities against ISIS, which has held 49 of its citizens hostage for the past three months. Ten countries have formed a coalition against ISIS on the sidelines of the NATO summit in Wales: the U.S., U.K., Germany, France, Italy, Denmark, Poland, Canada and Turkey as well as non-NATO member Australia. However, according to U.S. officials, more than 40 countries have agreed to be a part of the coalition. According to media reports, Turkey will not allow the coalition to attack ISIS in Iraq and Syria from its air bases, nor will it take part in combat operations.

Other than contributing to the coalition through other means, Turkey will cooperate with Western countries in stopping potential ISIS fighters. Turkish Foreign Minister Mevlüt Çavusoglu has recently said that more than 6,000 foreigners who were considered potential terrorists
have been banned from entering Turkey.

Furthermore, battling the influx of foreign fighters from Europe seeking to join violent armed factions in Syria such as ISIS, Turkish authorities detained many foreign nationals, including German and French citizens, attempting to cross the border into Syria.

U.S. Secretary of State John Kerry is expected to visit Ankara on Friday to discuss the coalition after U.S. Secretary of Defense Chuck Hagel sought Turkish contribution in his meetings with Turkish officials this week. Kerry will meet President Recep Tayyip Erdoğan, Prime Minister Ahmet Davutoğlu and Foreign Minister Çavuşoğlu during his visit. According to U.S. officials, Turkey is seen as a key to the coalition due to its proximity to the troubled regions of Iraq and Syria.

Kerry is aiming to build a coalition in the region with Sunni Arab allies and NATO member Turkey playing leading roles. Saudi Arabia has already agreed to open its military bases to train moderate Syrian rebels, according to U.S. officials. The foreign ministers of 12 countries including Turkey, Saudi Arabia, Egypt and the U.S. secretary of state held a meeting in Saudi Arabia's western city of Jeddah on Thursday to discuss the means of fighting the militant ISIS group.

Some gulf states could help with airstrikes, as the UAE and Qatar did in the U.S.-led aerial campaign over Libya in 2011 that helped lead to the ouster of Moammar Gadhafi. Gulf nations could also assist with arms, training, intelligence and logistics.

U.S. President Barack Obama on Wednesday laid out a long-term U.S. strategy against ISIS that will include expanding airstrikes against its fighters in Iraq, launching strikes against them in Syria for the first time and bolstering the Iraqi military and moderate Syrian rebels to allow them to reclaim territory from the militants.

Speaking to his counterparts during the two-day NATO summit in Wales, Erdoğan criticized ally countries for not taking effective necessary measures to stop its citizens from leaving their countries to join ISIS in war-torn Syria and Iraq, both of which border Turkey. Addressing the heads of NATO member countries, Erdoğan said that keeping silent about massacres by regimes in the region is paving the way for terrorist organizations, and thus, necessary measures should be taken immediately with determination to confront terror activities that threaten global security and stability.
Complaining about Turkey's Western allies' insufficient efforts in combatting ISIS, which has displaced and killed hundreds of thousands of people in Iraq and Syria, Erdoğan told British Prime Minister David Cameron that Turkey had taken all necessary measures. He later told Cameron that Turkey had blocked all foreign citizens whose names were given by the countries from which they held passports from entering Syria and Iraq. He then claimed that ISIS is more popular in Western countries and the issue should be questioned by the authorities of those countries. "These people [ISIS recruits] were educated and raised in your country," Erdoğan reportedly told Cameron.