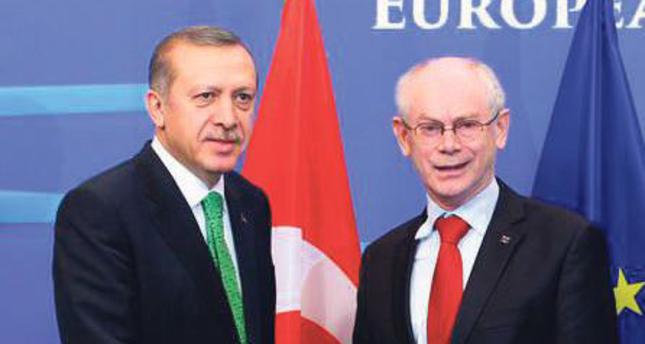 by Daily Sabah Sep 11, 2014 12:00 am
Over half of Turkey's citizens see EU membership as a positive thing, according to a survey by the German Marshall Fund of the U.S., revealing an upturn in the population's attitude for the first time in four years.

The number of Turkish people favoring the country's accession to the 28-block union has increased to 53 percent, an increase of 8 percentage points compared to last year, Transatlantic Trends 2014 public opinion survey revealed, indicating that support for joining the EU has exceeded 50 percent for the first time since 2010.

The survey also shows a 19 percent increase in the last four years in the number of Turkish citizens that consider NATO a necessity for the security of the country. Figures show an increase from 30 percent in 2010 to 49 percent in 2014.

Despite the abatement of the global economic crisis in recent months, there has been an annual 14 percent increase in Turkish people being affected by the crisis, suggesting the tapering of U.S. quantitative easing and geopolitical problems in countries neighboring Turkey have started to affect the lives of ordinary citizens.

The Transatlantic Trends survey conducted by the Marshall Fund and Compagnia di San Paolo to evaluate U.S. and EU public opinion is backed by the Barrow Cadbury Trust, the BBVA Foundation and the Swedish Foreign Affairs Ministry.

Commenting on the claims that millions of Turkish citizens would migrate to European countries if the country joined the EU, Turkey's newly appointed EU Minister and Chief Negotiator Volkan Bozkır said that even if the EU opened its doors to Turkish citizens, Turkey would close its gates to prevent its citizens from migrating to unemployment-ridden EU countries. "If they open their doors, we would close ours. If one goes to Belgium, what is he going to do there? There are no jobs or anything there," Bozkır said during a televised interview in response to a question on rumors that some 20 million Turks would be settling in western EU countries.