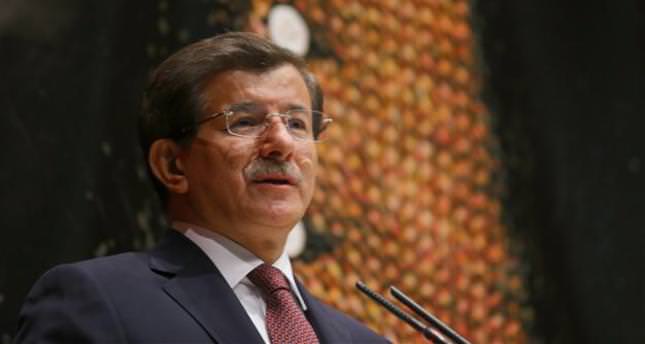 Commenting on Gülen Movement-linked media’s accusations regarding the government’s rescue of ISIS-held Turkish citizens, PM Davutoğlu stated that Gülenists will eventually learn how to enjoy good news celebrated by the nation

Prime Minister Ahmet Davutoğlu strongly criticized the Gülen Movement – led by U.S.-based imam Fethullah Gülen – for coming up with various false claims regarding Turkey rescuing its 46 citizens from the hands of the Islamic State of Iraq and al-Sham.

Prominent figures and various media outlets of the Gülen Movement – which has been accused of attempting to overthrow the government through its agents in the judiciary and national police department – triggered criticisms from the public after raising various accusations against the government regarding the hostage crisis. Despite calls from both the president and prime minister to not use provoking language when covering the hostage crisis, the Gülen-linked media constantly questioned why government officials restrained from calling ISIS a terrorist organization. The movement subsequently drew the ire of people for putting the lives of captive Turks in jeopardy. Following the release of hostages, President Recep Tayyip Erdoğan stated that Turkey was ready to lend military support to the coalition against ISIS, which he described as a "bloody terrorist organization."

"You all know the lies they told about our intelligence chief. These days, this organization [Gülen Movement] is trying to humiliate our rescue operation and also trying to find something to accuse us of. These people do not know how to share the people's joy and sorrow, but we'll teach them how to enjoy good news with the nation," Davutoğlu said. Some Western media circles and Gülen-linked media outlets in Turkey spread accusations against the Turkish government since ISIS took dozens of Turks, including diplomats, hostage in June. They constantly accused the government of aiding the militant group that was listed as terrorist group by the same government in 2013. Furthermore, Gülenists previously claimed that the government had given its citizens to ISIS itself to ensure they were released around the time of the presidential elections, which were held in August. Furthermore, a Gülen-linked newspaper also claimed that the government agreed with ISIS to swap the Tomb of Suleiman Shah, a Turkish enclave in Syria, for the Turkish citizens they held. After the rescue of hostages, the movement's media outlets are now claiming that the National Intelligence Organization had no role in freeing the hostages. Davutoğlu recently made a statement about Gülen's extradition from the U.S., stating that recent investigations brought new documents that show there was an effort to influence politics in Turkey, claiming it was natural to stop this effort and request the extradition of the related parties.

After President Erdoğan made an extradition request to his American counterpart Barack Obama during the NATO summit last month concerning Gülen, who resides in self-imposed exile in rural Pennsylvania, that he be deported or sent back to Turkey. Davutoğlu told Turkish reporters, "If there is an organization trying to overthrow the legitimate authority in Turkey established through democracy - and there is - and if this organization has connections with someone residing in Pennsylvania, then we have of course the right to make demands from the U.S. for termination of these illegal activities.

The Gülen Movement is accused of wiretapping thousands of people including government officials and encrypted phones with the help of affiliated members of law enforcement, public prosecutors and judges. Gülen's followers are believed to have orchestrated a corruption probe against Erdoğan and his inner circle.