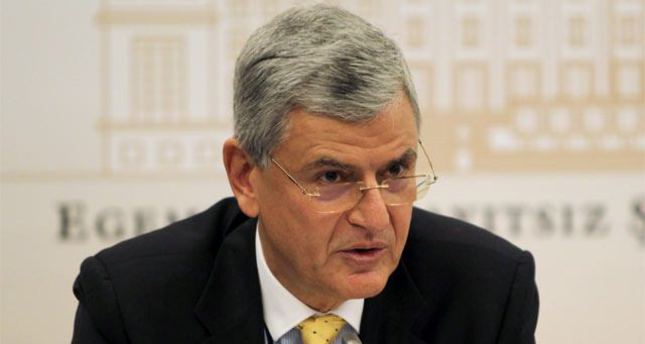 In an exclusive interview with Daily Sabah, EU Minister and Chief Negotiator Volkan Bozkır said that despite all the efforts to undermine Turkey’s reputation, the EU’s 2014 progress report indicates the country’s power

There were rumors that after last year's Gezi Park protests and the Dec. 17 and Dec. 25 coup attempts, relations between the EU and Turkey were damaged beyond repair, and even the accession process was going to be suspended. However, the 2014 Progress Report for Turkey, which was announced yesterday, is accepted as an "objective and balanced" report as it highlights both positive and negative aspects. After the announcement, answering Daily Sabah's questions, EU Minister and Chief Negotiator Volkan Bozkır defined the report as "livable and arguable." Bozkır said that with his past as an ambassador he has witnessed all of the 17 progress reports and he will evaluate the critiques of the report carefully. He said, "We will work on the rational and constructive critiques, however, there are some that we do not agree with. We will share our views with them and try to mend the reasons that cause these critiques. On the other hand, I can state that this report is a balanced and objective one that we can utilize in our EU ascension process."

The expression, "parallel structure," was included in the report

The reference to the "Parallel Structure," which attempted a coup on Dec. 17 and Dec. 25, one of the points that stand out in the report. On page 9 of the report it says, "In response to the allegations of corruption, the government alleged that there had been an attempted judicial coup by a 'parallel structure' within the state, controlled by the Gülen Movement." Regarding the mention of the parallel structure in the report, Bozkır said that Turkey was successful in expressing its concerns, which were eventually understood by the EU. Bozkır added that the attempts to mend the damage caused in the judicial and law enforcement systems by the parallel structure were at first misunderstood, however, later with contacts on all levels, this was overcome. Bozkır asserted that they have objected to 26 topics in the report, extracted Turkey's views on them and demanded them to be changed. Bozkır added, "We objected to approximately 26 topics and demanded amendments [to them]. More than half of these amended topics were preferred in the report. This was a very positive process, we acted with transparency and they have observed this. A report indicating that they have understood new Turkey's positive and strong messages on the road to the EU with its new prime minister and a president elected by popular vote for the first time in the Republic manifested."

Bozkır said that they were working on one of the most focused topics, which is the general disregard by the government on the allegations of corruption, to clarify and to resolve misinformation. Bozkır added, "Our minister of justice explained to the EU Commission's expansion commissar the need for change in our judicial system in detail last week. I think it was an important meeting to clarify the issue. Therefore, the EU will clearly see that our intention is to mend the damaged structure of our judicial system and to mend the reputation of our law enforcement force."

Turkey continues to be an indispensable part of the Europe

Bozkır thinks that the change of the president of EU Commission and Expansion Commissar and the rise of ultranationalist in the EU parliament will not be an issue for Turkey's EU accession process. "There is a new style in work; however, the importance of expansion is clearly stated." According to Bozkır, Turkey being indispensable for the EU is a more accepted point, increasing day by day. "There is a common interest in this relationship and this relationship will be maintained as long as common interests exist. These interests are dominant. I don't recall any period of time when the EU needed Turkey and vice-versa," Bozkır said. "Even when it is surrounded by strife, we see Turkey as an indispensable part of the EU with its political and economic stability for 12 years, young population and strategic position on the energy highway."

Bozkır summarized Turkey's emphasis on its new EU strategy: "This strategy can be considered as a constitution regarding EU-Turkey relations in a manner of speaking. The strategy includes the principles that the relation relies on, how Turkey perceives it and what Turkey will do. There are three steps in this strategy: political reforms, adaptation to EU regulations and communication. The first will be based on the Reform Observation Group. We are preparing an action plan that consists of two parts for the adaptation to EU regulations. The first part includes a period of time until June 2015 and the other will include the years 2015 to 2019. In this, there will be the plans for which regulations will be applied. Firstly, I will present the first part, which is until 2015, to the Council of Ministers next Monday. We will promulgate it at the end of October. The 2015 to 2019 part will be promulgated by the end of November. The communication strategy was accepted by the Council of Ministers, which I will declare on Oct. 16. There are two principal elements to it. These are the EU's perception of Turkey and Turkey's perception of the EU. In regard to this communication, we will effectively utilize nongovernmental organizations, the business world, universities, unions and such."

Talking about Greek Cyprus's unilateral withdrawal from the peace negotiations and its possible consequences in EU-Turkey relations, Bozkır said that Greek Cyprus's irreconcilable attitudes will not affect their aims. "Our wish is that the negotiation started on Feb. 11, 2014 will be accomplished successfully. This is for the benefit of all. However, we will not yield and will not compromise to this irreconcilable attitude during our EU ascension process and while we are opening chapters. We will continue on our way."