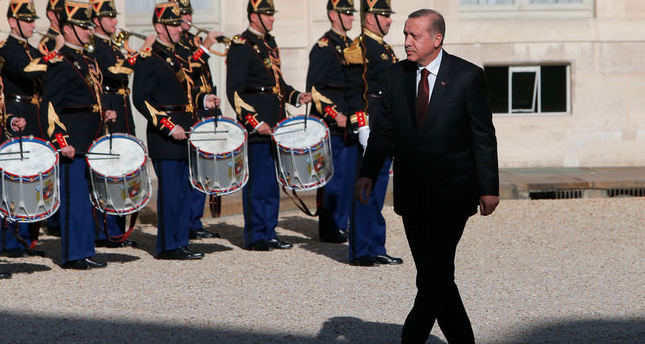 Returning from Paris, President Erdoğan touched on French support for Ankara’s regional demands and called on the U.N. and NATO to establish a no-fly zone and safe zone

President Recep Tayyip Erdoğan on his way back from Paris on Saturday responded to questions regarding the current developments in Iraq and Syria, their implications on Turkey and the region and highlighted the necessity to establish a safe zone above the 36th parallel while he criticized the 1916 Sykes-Picot Agreement for its shortcomings that he claimed had direct implications to the current problems in the Middle East.

Erdoğan said that he had spoken with President François Hollande of France and stated that Turkey and France have a very similar stance on the Free Syrian Army (FSA). "France supports our proposal, which anticipates the establishment of a no-fly zone, a safe zone and providing FSA fighters with training and equipment," Erdoğan said, and explaining that the current situation in Syria is alarming and moderate FSA forces may provide a viable solution to the ongoing conflict in the region. He said that there is a serious amount of disinformation about Kobani. For instance, he explained that the Kurdistan Regional Government (KRG) initially proposed to send 2,000 peshmerga fighters to fight in Kobani but the number was reduced to 500, which was rejected by the Syrian-Kurdish People's Protection Units (YPG). "This number was then reduced to 90, but the YPG also opposed this," Erdoğan said, claiming that the YPG demanded that peshmerga forces hand them arms and go back to Northern Iraq in efforts to ensure that the YPG will gain sole control of Kobani from ISIS. More importantly, Erdoğan said that there are no civilians in Kobani at the moment as they have taken refuge in Turkey, explaining that there are around 2,000 armed fighters in Kobani fighting against ISIS.

"Turkey is the country that is under direct threat by the ongoing conflict in the region," Erdoğan said, and specified that a U.N. Security Council resolution or a NATO resolution would be necessary to establish a no-fly zone and a safe zone in the region. Touching upon the fact that there are over 1.6 million refugees in Turkey, he said that the establishment of a safe zone over the 36th parallel, which coincides with the region between Turkey, Iraq and Syria, would benefit civilians. He also suggested that different plans could be made for this region and that settlements with proper infrastructure could be constructed.

Referring to the Sykes-Picot Agreement which was secretly signed by the U.K. and France with Russian assent following World War I and outlined their spheres of influence in the Middle East, Erdoğan said that the agreement has proved to be ineffective as peace in the region has not been possible. He said that a similar attempt was made when foreign powers attempted to divide Iraq into three pieces between Kurds, Shiite and Sunni Arabs and Turkmens. "They failed to implement this plan," Erdoğan said and described Iraqi former prime minister, Nouri al-Maliki, and his government as representing the second attempt that also divided the country. He said that Iraq's new prime minister, Haider al-Abadi provides hope in terms of unifying the country again, but noted that he may extend his efforts over a period of time.