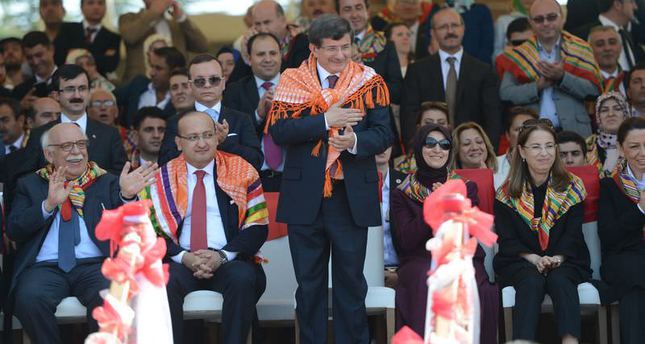 Ankara is set to update the road map for the reconciliation process after the Oct. 6-7 clashes between pro and anti-PKK groups as the HDP seeks to revive the stalled reconciliation talks with the gov’t

The Turkish government is ready to update the road map for the reconciliation process that started between Ankara and Kurds to end the decades-long conflict in southeastern Turkey following the Oct. 6-7 Kobani protests that morphed into deadly clashes between pro and anti-PKK groups and claimed dozens of lives.

Religious authorities will be included in the process to ensure the compromise and the Wisemen Committee, which was established for the reconciliation process, is expected to visit the southeastern region along with nongovernmental organizations and some cities where provocations and vandalism have been present.

Prime Minister Ahmet Davutoğlu yesterday said that if the Peoples' Democratic Party (HDP) takes a contributive position and stays within democratic lines, the government will continue to hold talks over the reconciliation process.

Underscoring that public order is of the utmost importance to the government, Davutoğlu pointed out that Ankara has no tolerance for provocations and vandalism not only in eastern Turkey but the west.

On Sunday, Davutoğlu harshly criticized the HDP and its political discourse referring to the party's call for street protests, which morphed into provocations and vandalism afterward.

"Their language, political terminology, the policies that they follow always leaves some [social] segments out in the cold," Davutoğlu said, accusing the HDP of not adopting soft and peaceful politics.

Even though senior government figures and HDP deputies announced in late October that the reconciliation process will be coming to its conclusion in months if no setback occurs, provocateurs and assassinations have dominated the country's agenda and turned into a challenge for the process.

PKK militants assassinated three Turkish off-duty soldiers in the southeast, stoking tensions both in the region and between pro and anti-PKK groups.

The assassinations came after the Oct. 6-7 Kobani protests that some pro-PKK groups accused the government of supporting the Islamic State of Iraq and al-Sham (ISIS) and of not giving enough help to the battle between ISIS and Syrian Kurdish People's Protection Units (YPG) fighters from the Democratic Union Party (PYD) – the Syrian wing of the PKK.

Following the demonstrations and vandalism, Ankara suspended negotiations with the HDP in a response to those who sabotaged the process, according to officials from the HDP.

HDP Group Deputy Chairman Pervin Buldan on Monday said that the party will call the government on Tuesday to open the negotiation channels that are closed due to security and safety issues with an aim to put the process back on track.

In a comment with an Austrian newspaper, Kurdish Communities Union (KCK) founding member Cemil Bayık on Monday quoted by saying that PKK is suggesting a third power to observe the process, possibly the U.S. or an international delegation.

"We need a go-between, we need observers. We would also accept the Americans. From our view it is moving in this direction," he added.
The PKK took up arms against Turkey in the 1980s in order to carve out an independent Kurdistan in the southeast of the country.