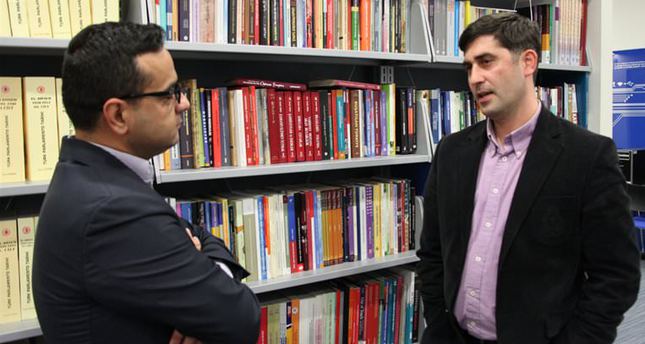 In an exclusive interview with Daily Sabah, the director of security studies at Foundation for Political, Economic and Social Research, Murat Yeşiltaş, evaluated the ISIS assault on Kobani, Syria and its impacts on Turkey and the reconciliation process

Kobani, which is under siege by the terrorist organization Islamic State of Iraq and al-Sham (ISIS), is still a priority topic in Turkey, as well as on the international agenda. Along with forcing hundreds of thousands of people to seek shelter in Turkey, it also affected regional and Kurdish politics. The violent acts during the Oct. 6-7 incidents, the settlement of various Kurdish groups in Dohuk and Kurdistan Regional Government (KRG) peshmarga forces moving to Kobani to help via Turkey are some of the significant events that we have witnessed. The Daily Sabah spoke to Dr. Murat Yeşiltaş, who is known for his work on critical geopolitics, political geography and Turkish foreign policy and the Middle East, about the implications of these developments for the region.

How did the Kobani assaults affect regional Kurdish politics?

For a better analysis, we have to define the current situation clearly. To begin, the Arab Spring so far has had three basic stages. The first stage was society's demand for democracy. While there are differing demands when comparing each and every country, the essential demands were for freedom and democracy. The second stage is a conclusion of demands for democracy with the Syrian civil war becoming intense and the coup in Egypt. We are in the third stage now in which internal strife has gained an international dimension.

These three stages, which were basically local, echoed throughout the international community. For example, in the first stage the state was against non-state actors and NGOs, while in the second stage there was an armed conflict between the regime's troops and the opposition. The third stage became what we can call a proxy war. When we look at Syria, we see Turkey on one side, Iran on the other, and Saudi Arabia also. This means that the reference objects of the confrontation are changing and the Arab Spring is becoming a military conflict. This started to change the dynamics both at international and regional levels.

While the intense conflict between ISIS and Kurdish groups in Kobani reveals that ISIS has become a "geopolitical reality" in the region, it also indicates the creation of a new Kurdish reality, despite the heterogeneity.

How do you evaluate the coalition or the U.S.'s sole focus on Kobani, while Turkey suggests an extensive plan that includes administrative changes in the region for the resolution of the issue, claiming Kobani is not the only concern of this issue?

There are definitive differences between Turkey and the U.S.'s approach to this issue. At this point, the U.S. has become a country that is trying to maintain its reputation and keep its fight against terrorism symbolic. On the other hand, the Western world and the U.S. are not directly facing the ISIS threat. For example, news about Ebola is the top priority in the U.S. media. Also, the flow of refugees and the problems it creates are not felt by these countries.

The Western media sees Kobani as a symbol that will trigger an armed fight for democracy, as it did in the Arab Spring, which puts it to the fore. However, the U.S. or other countries do not wish to participate directly in the fight on terror by sending troops, but they are trying to force Turkey to take action. The focus on Kobani and the unfounded news that alleges Turkey is supporting ISIS are efforts to force Turkey into this conflict.

We can observe that Kurds from Iraq, Syria, and Turkey are mobilized against ISIS in Kobani. Do you think that what is taking place in Kobani created a sense of belonging among the Kurdish population?

The notion of being from Kurdistan is a historical term that indicates the lands where Kurds live. On the other hand, we see that ISIS has destroyed both Syrian and Iraqi state sovereignty and borders. Against this threat, ethnic groups in Iraq and Syria started to protect themselves by forging alliances. Fighting in Kobani became a symbol of the protection of Kurdistan.

The Dohuk settlement and KRG peshmargas going to Kobani are results of cooperation among different Kurdish groups against the ISIS threat. However, being from Kurdistan has different dimensions in various countries. While it relies on the reconciliation process in Turkey, it is based on autonomy in Iraq with the KRG and the province of Rojava in Syria.

In this context, how do you see the future of the reconciliation process?

The process is the most important dynamic for both Turkey and the region because it foresees the integration of all minorities on the basis of equal citizenship. The success of this process in Turkey will trigger similar effects in other countries as well, which will result in the maintenance of territorial integrity for countries in the region. However, the structural crisis and armed conflict puts the reconciliation process in a tight spot and may force Turkey to be a more protective country. If the issue in Syria is not resolved, the conflicts in the region may escalate to a more critical level.

In all of the discussions regarding Middle East borders and hegemony, the Sykes-Picot Agreement is shown as a reference and the cause of recent issues in the region due to artificially defined borders. How do you evaluate these discussions?

Turkey's discomfort regarding the current borders is due to the fact that these borders cut historical ties between societies. I should highlight that Turkey does not advocate a change in physical borders, but in the psychological barriers that can be defined as geographical imagination. Historically speaking, we can see that order in the Middle East is always established after great wars. For a new order to be established, a great war may be needed in the region.


He is an academic member of the International Relations Department and Middle East Studies Center at Sakarya University, also the Security Studies director at SETAV (Foundation for Political, Economic, and Social Research). He graduated from Sakarya University's International Relations Department. He completed his Master's Degree at the same university. He was a guest researcher at the European Studies and International Politics departments of Lancaster University in 2008-2009 and a guest professor at Virgina Polytechnic Institute and State University in 2010-2011. He received his doctorate from Marmara University in 2012 with his thesis "Positioning Turkey: Geopolitical Mentality and Army in Turkey." Associate Professor Yeşiltaş is the associate editor of the Perceptions magazine and the editor of the Ortadoğu Analiz (Middle East Analysis) magazine.
Last Update: Nov 03, 2014 11:38 pm