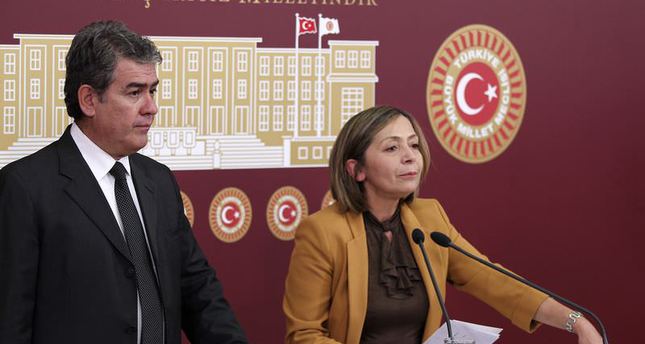 by daily sabah
Nov 04, 2014 12:00 am
After main opposition Republican People's Party (CHP) Ankara deputy and neo-nationalist party member Emine Ülker Tarhan resigned with bitter statements on Friday, some media outlets asserted that neo-nationalist party members who oppose CHP leader Kemal Kılıçdaroğlu's policies will offer resignations one by one once a week to shake up the party.

Süheyl Batum asserted Monday that there are 20 deputies within the CHP who stand against the current policies of the party.

Batum said that these dissident members should gather and discuss the wrongheaded policies of the party administration.

He also dismissed allegations that deputies who resigned or are to resign will take part in other parties on the left such as the Democratic Left Party (DSP) and Labor Party (İP).

The crisis within the main opposition party first erupted when former Secretary-General of the Organization of Islamic Cooperation (OIC) Ekmeleddin İhsanoğlu's was announced as the joint presidential candidate for the Aug. 10 presidential election. Some deputies raised their voices over the CHP administration's İhsanoğlu choice and pushed the party to hold an extraordinary party congress in early September. Resignations started only two months after the re-election of Kılıçdaroğlu as party leader at the 18th extraordinary party congress.

Former CHP leader and Antalya Deputy Deniz Baykal, who was discharged from the CHP after a sex tape scandal, will not intervene in the resignation scandal which erupted within the party, according to reports. Baykal was expected to announce his candidacy for the party chairmanship at the 18th extraordinary congress with support from intra-party opposition, but he preferred not to get involved in any rivalry during "this critical period of the CHP."

In her speech, Tarhan referred to Kılıçdaroğlu's election failures saying that the CHP administration is growing distant from the party's grassroots.

"What put the CHP in a difficult position were its policies that moved it away from its grassroots," said Tarhan, accusing Kılıçdaroğlu of adopting harsh rhetoric toward CHP supporters.

Referring to Kılıçdaroğlu's strict statement toward CHP voters pushing them to vote for the CHP by slamming the table and saying "whether you like it or not, you will go to the ballot box," Tarhan said that the CHP administration is not aware of the party's responsibilities.

With her bitter press statement regarding her resignation, Tarhan blamed the CHP's administration for their "wrong and weak policies," which she claimed are not representative of the people's sentiments and were not made with winning elections in mind.

Tarhan primarily targeted the CHP administration for its passive stance against the government's foreign policy, terror and labor issues while criticizing the CHP's attitude toward the opposition within the party.

Tarhan's statement reads, "I resign from the CHP after the extraordinary party assembly turned into a competition to gain seats and the disregarding of my call to draw a serious road map, not learning from mistakes made in the presidential elections [on Aug. 10]."

She further asserted that the CHP made irresponsible calls during a critical period that saw terrorist activities shake Turkey and that the party had vague policies and incoherent discourses concerning the Oct. 2 mandate.

In the Aug. 10 presidential election, Tarhan's name was allegedly among those who would be mentioned for presidential candidacy, but these claims were dismissed by both her and the CHP. Following the CHP's loss in the presidential election, the 18th extraordinary party congress gathered to elect a party leader in response to the harsh criticism of intra-party opposition within the CHP. It was also asserted that Tarhan would announce her candidacy for party leadership to compete with Kılıçdaroğlu, but these allegations were dismissed when CHP Vice Chairman Muharrem İnce announced his candidacy to run in opposition first.