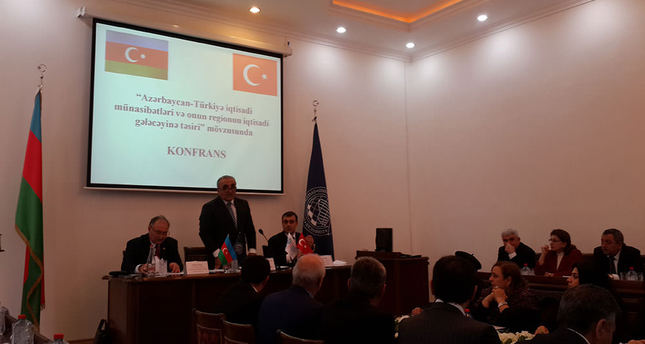 On the first day of the event two simultaneous conferences were held at the Azerbaijan Diplomatic Academy (ADA) and Azerbaijan State University of Economics with the participation of dignitaries, including a member of Turkish Parliament's Azerbaijan Friendship Group, Adnan Yılmaz; deputy undersecretary of the Energy and Natural Resources Ministry, Zafer Benli; SAM Chairman Professor Ali Resul Usul and AzerSAM Chairman Farhad Memmedov as well as experts and academics.

Referring to the third president of Azerbaijan, Haydar Aliev, who said, "I am representing Turkey in places where there is no representative of Turkey and Turkey represents Azerbaijan if there is no representative from Azerbaijan," Usul emphasized the importance of developing relations in different fields and stressed the significance of taking steps in harmony especially on regional and international issues. Usul also underlined that the two countries should work together to develop new public policies against issues such as the Armenian allegation of genocide and the Nagorno-Karabakh issue, which concerns both countries closely.

The second panel titled Azerbaijan-Turkey Economic Relations and Economic Future of the Region, held at Azerbaijan State University of Economics. Speaking at the panel, University Rector Adalet Muradov said that the economic future of Turkey and Azerbaijan will determine the future of the region and stressed the importance of economic integration of the two countries. Yılmaz said in his speech that the Azerbaijan and Turkey's economies naturally complement each other and added that Azerbaijan is Turkey's gateway to Central Asia while Turkey is the West's gateway to Azerbaijan.