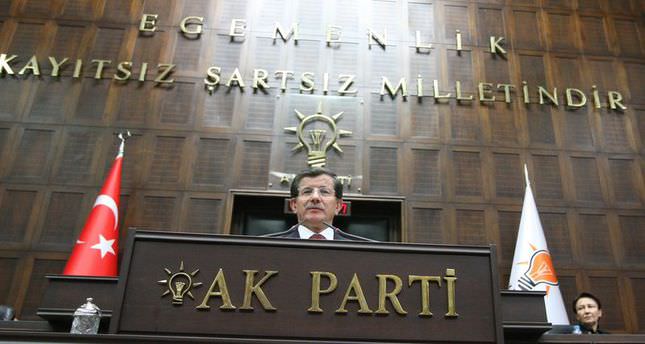 PM Davutoğlu, in a speech at Parliament on Tuesday urged all political parties to adopt softer rhetoric for reconciliation and highlighted the significance of public order to ensure peace across the country

Underscoring the significance of public order, he said that public order in Turkey is a necessity for today and tomorrow and that when there is no public order, all citizens living in Turkey are under direct threat.

Davutoğlu said that the government is open to any kind of criticism but strictly opposes vandalism, terror and violence on Turkish soil and that "the reconciliation process is the sole reason behind the surge of investment to eastern and southeastern Turkey."

Davutoğlu spoke on the reconciliation process between Ankara and Kurds that started with Justice and Development Party (AK Party) initiatives and the latest provocations by some pro-PKK groups to undermine the process and hinder it from reaching its conclusion.

Speaking at his party's weekly group meeting on Tuesday, he said that some people attempt to weaken the ties of brotherhood strengthened by the reconciliation process. Davutoğlu went on to criticize People's Democratic Party (HDP) deputies for calling on people to take to the streets in protests under the pretense of the ISIS siege of Kobani, which resulted in clashes and vandalism. He underlined that the reconciliation process was not initiated by the government to please a certain segment, but rather it was initiated to put a permanent end to the 30-year conflict and improve democratic rights and freedoms for Turkey's Kurdish minority population and said it was about time that the HDP question its actions.

Davutoğlu continued his weekly address by saying the new Turkey is built on stability and the freedoms of thought, religion and language.

Davutoğlu said that old Turkey consisted of a period of political turmoil where governments failed to function properly and changed on a consistent basis. "Old Turkey means instability while new Turkey means stability and development," Davutoğlu said, and highlighted that a state of emergency was entrenched in the fabric of the old Turkey. He said that one of the actions of the AK Party consisted of removing the state of emergency while he argued Turkey will never experience states of emergency in the future.

He also said that political stability benefits the economy the most while the government is ready to take all necessary steps to revive the economy.