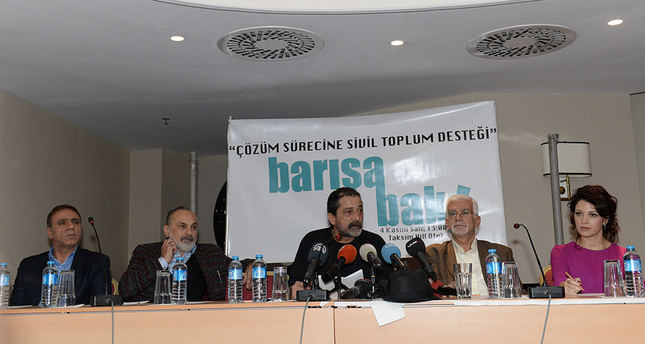 by Daily Sabah Nov 04, 2014 12:00 am
Some 69 Turkish intellectuals, whose number includes prominent writers and academics, have launched a campaign called "Forward with Peace", which is intended to acquire civil society's support.

The campaign was announced to the public on Tuesday via a press conference in which Cengiz Alğan, Nagehan Alçı, İlhami Işık, Atilla Yayla ve Haşmet Babaoğlu gave speeches explaining the purpose of the campaign.

The intellectuals called on Turkish society to stand by with the Reconciliation Process to rebuild the common reasoning and conscience of New Turkey.

Writer Cengiz Alğan said that the campaign aims to help the Reconciliation Process proceed in a healthy way, support the negotiating parties, and positively affect Turkish and Kurdish communities' attention to the Process.

"The society is way ahead of the politicians in terms of peace" said Alğan, and the campaign will continue with party meetings, conferences, a public peace concert and a meeting in early spring. A peace train from İstanbul bound to Diyarbakır is also being planned.

Nagehan Alçı said that the process should be positioned outside of the political spheres.