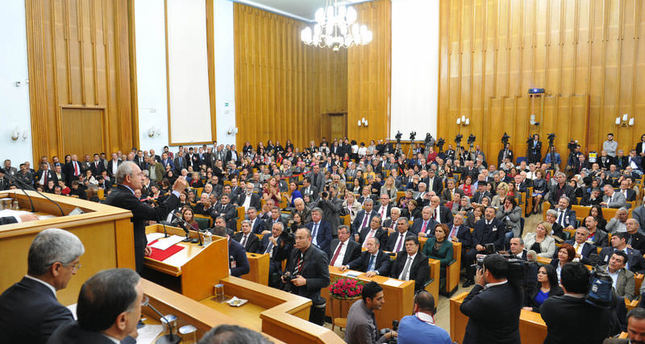 by daily sabah
Nov 05, 2014 12:00 am
As the political turmoil grows within Turkey's main opposition, Republican People's Party (CHP), analysts claim that the crisis within the party is being caused by its attempts to resemble its main opponent, the AK Party.

Speaking in a televised interview, Dr. İbrahim Uslu, the president of ANAR Research Company, has claimed that CHP has largely failed to properly manage the ongoing crisis within the party and that they are trying to imitate the AK Party. "CHP is an expired party" said Uslu, who went on that the party's 70 year-old ideological formation is outdated as it does not have any features which may appeal to the political system of 2014. "This is why a transformation within CHP is inevitable" Uslu said, noting that this is acknowledged by a few actors within the party and by the low response of the voters in elections, which barely surpasses 30 percent.

CHP had previously attempted to change its dogmatic secularist rhetoric to appeal to conservative voters when the party tried to break the ice by accepting chador-wearing women into the party under the leadership of Deniz Baykal in 2010. The party's chador initiative received backlash from party members for threatening the secular nature of the party and an anti-chador campaign was started accordingly. Some CHP supporters openly tore chadors into pieces and stepped on them, while an elderly woman wearing a chador who attempted to get on a campaign bus was attacked by a number of CHP members. "The strategy proved ineffective and ended before it properly started" said Dr. Uslu, who noted that this marked the beginning of CHP's attempts to look for conservative votes.

As the attempts to garner more votes failed, the party nominated politicians from the right to try and attract more votes according to Dr. Uslu. He noted that these efforts did not meet CHP's expectations, and tensions mounted further when the party cooperated with the controversial Gülen Movement during the presidential elections, which also ended with failure.

"Why would people vote for an imitation when an authentic right-wing party exists?" asked Dr. Uslu. He suggested that CHP's movement towards the right has proved unsuccessful largely because there is no need for another right-wing party in Turkey, which already has a few. He claimed that, while there is a need for a social democrat party, the CHP insists on ignoring this fact, which has caused many of its neo-nationalist members to resign from the party.

The resignation of neo-nationalists is expected to have negative implications on the CHP, according to analysts, who claim that the party will lose votes if they cannot successfully manage the crisis. "One of the biggest weaknesses of the CHP is that they have the will to transform themselves but have no idea about how to do it" Dr. Uslu claimed, who noted that the only political solution to their problems is to become a social democratic party. He argued that, if CHP fails to become a social democratic party, they would become a derivative of the Worker's Party of Turkey, which combines Maoist rhetoric with hard-line Kemalism.

Following Emine Ülker Tarhan's resignation from CHP last week, other deputies have stated that they also stand against the current policies of the party. Some media outlets have alleged that neo-nationalist party members, who oppose CHP leader Kemal Kılıçdaroğlu's policies, will offer resignations one by one every week to shake up the party.