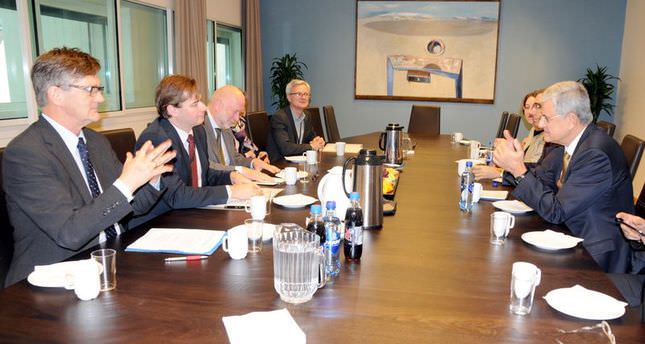 by AA Nov 05, 2014 12:00 am
"Serious problems may arise" if Turkey does not become part of the Transatlantic Trade and Investment Partnership Agreement, or the TTIP, between EU and the U.S., Turkey's EU Minister Volkan Bozkır said Tuesday.

Bozkir, who arrived in Norway Tuesday, held a meeting with Norwegian Deputy Minister of Industry and Trade Lars Jacob Hiim.

According to the minister, who is also Turkey's Chief Negotiator for EU talks, both non-EU countries shared their accession experiences during the meeting.

Speaking to The Anadolu Agency after his meetings, the minister said Turkey was doing its "best'' to automatically become a member of the partnership agreement.

"Serious problems may arise," he warned if the Free Trade Agreement does not apply to Turkey, which he emphasized, is a member of the Customs Union.

Norway, which is also member of the European Free Trade Association, could face the same problems, he said. He added the two countries discussed how they could cooperate to avoid such problems.

Turkey is concerned about the agreement since it has no say in the ongoing negotiations between EU and the U.S., but still will have to abide by its terms and conditions because of its Customs Union with the EU.

The EU and Turkey established the Customs Union in 1995, which is considered a stepping stone towards becoming an EU member.

Turkey's EU accession negotiations entered into a stalemate in 2007 because of the Cyprus issue and the opposition of the German and French governments.

Negotiations have been continuing for a long time to reach a Free Trade Agreement between Turkey and the European Free Trade Association member countries and ?significant steps' have been taken in this regard, Bozkir said.

While Turkey wants the agreement to put more weight to road transport and services, Norway wants to prioritize areas such as fishing and farming, he said. The two countries, which have a trade volume between one-and-a-half and two billion dollars, are trying to find a middle ground and sign an agreement as soon as possible, he added.

"We know that Norway is a potential country to increase the capacity of hydropower plants and to supply natural gas in liquid form to Turkey," the minister said.

Turkish officials argue that future Free Trade Agreements signed by the EU with other countries, such as the U.S., would effectively open Turkey's market to exports from these states because Ankara is a signatory of the Customs Union Agreement.

But, at the same time, it would also effectively block Turkish exports from benefiting from tax advantages in those same states, should Ankara not be a party to the free trade deals negotiated by the EU.

The Customs Union Agreement with the EU, which was signed in 1995, has come under criticism as of late in Turkey as advantages acquired over the last 19 years have slowly been eroded.