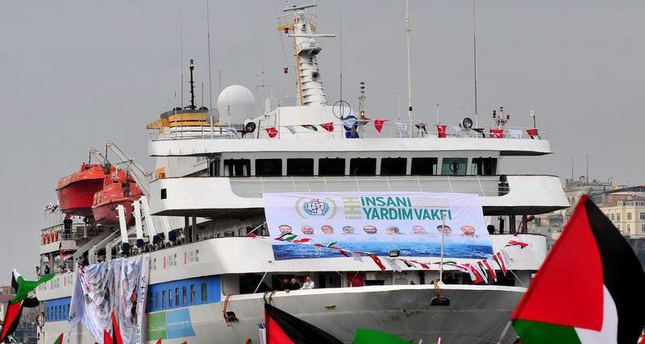 by Daily Sabah with Reuters
Nov 05, 2014 12:00 am
Prosecutors at the International Criminal Court have decided not to investigate Israel's 2010 raid on a Turkish Mavi Marmara aid flotilla that was trying to break the blockade of Gaza, even though there is a "reasonable basis" to believe Israeli soldiers had committed war crimes during the raid , according to a court filing seen by Reuters on Wednesday.

Prosecutors said there was a "reasonable basis" to believe Israeli soldiers had committed war crimes during the raid but the crimes in question were not of sufficient gravity to fall under the court's jurisdiction.

Earlier this week, Turkey's IHH Humanitarian Relief Foundation chairman Bülent Yıldırım said that the ICC prosecution team had finished its investigation in the Mavi Marmara case and decided that war crimes were committed by the Israeli Navy in the Mavi Marmara tessel in international waters.

On 31 May 2010, nine peaceful activists, nine Turkish, including one Turkish-American, were killed by the Israel Defence Forces, when the Israeli commandos raided the Mavi Marmara flotilla seeking to break the blockade imposed on the Gaza Strip.

The 2010 incident caused international outrage and soured Turkish-Israeli ties. In March 2014, Turkey received an apology from the Israeli government. The two states are now looking to normalize their relations with a deal said to be involving compensation for the victims' families.