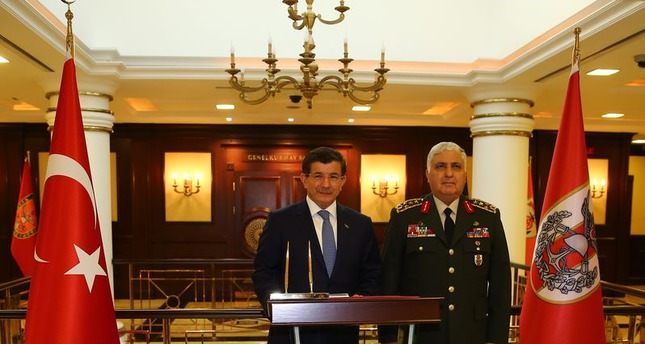 PM Davutoğlu said if Aleppo, Syria’s second-largest city, falls into the hands of the Assad regime, Turkey may face a serious refugee influx while criticizing the U.S.-led airstrikes that only target ISIS and not the Assad regime

As Turkey opened its borders to war-torn Syrian refugees fleeing the violence in Syria, which surfaced with the civil war in 2011 and continued apace with the rise of the Islamic State of Iraq and al-Sham (ISIS) threat in the region, there are currently more than 1.5 million Syrians who have found shelter in Turkey.

Ankara has been pushing for a safe haven for refugees inside Syria near the Turkish border as well as the establishment of a no-fly zone with the help of the international community, including the U.N.

Later in his speech, Davutoğlu said that the refugee influx that could occur if Aleppo falls is one of the reasons why Turkey has demanded a safe zone along its border.

"A precaution must be taken against the Assad regime," Davutoğlu added.

Reportedly, Syrian regime forces have besieged Aleppo and the city is about to fall into the hands of the regime. Touching on the latest development in the province, Davutoğlu said that Turkey is following the developments with concern.

He said that the Assad regime gained a significant advantage when the international community took the decision to intervene in the latest developments in Iraq and Kobani following the ISIS advance in the region.

The prime minister asserted that while the world agenda was occupied with Kobani and ISIS, the Assad regime continued to kill people in Homs and its surrounding areas.

Davutoğlu said international media outlets had forgotten to cover the Assad regime's massacres in the region and that the Assad regime had recently intensified its offensives on major cities, including Hama and Idlib "by exploiting the world's eyes that are concentrated only on the ISIS threat in Iraq and Kobani."

"The Syrian people have been oppressed for the last three and a half years and they have showed noble resistance [against the Syrian regime] in the symbolic province of Aleppo," he added.

Davutoğlu continued his speech by saying that the Assad regime's attacks spawned the rise of ISIS in the region.

"In return, the conjuncture created by ISIS paved the way for Assad to mount pressure on Aleppo," he added.

Davutoğlu criticized the airstrikes conducted by the U.S. led anti-ISIS coalition for not targeting the Assad regime.

Also on Tuesday, French Foreign Minister Laurent Fabius called on the international community to intervene in Aleppo with the aim of helping opposition forces battling against both the Syrian regime and ISIS militants.

"The coalition must now save Syria's second city of Aleppo, which represents a political alternative, the only one likely to preserve the prospect of an open, pluralistic, democratic Syria," he was quoted in a column published in the French daily Le Figaro.

Turkish Foreign Minister Mevlüt Çavuşoğlu yesterday touched on the issues of ISIS and U.S. airstrikes in the region in a political briefing at Parliament. Mentioning the ISIS threat in his speech, Çavuşoğlu said that Turkey has taken responsibility in the region, accusing the U.N. of failing to cope with the refugee crisis in the region.

Çavuşoğlu reiterated that Turkey was one of the first countries to warn the world of the ISIS threat, listing ISIS as a terrorist organization in October 2013.

He claimed that ISIS is not a regional problem, but a global problem and will not be stopped by airstrikes alone.

"I hope that an agreement to adopt a comprehensive strategy will be made and we bring peace to the region with the anti-ISIS coalition," Çavuşoğlu said.

Criticizing the airstrikes carried out by the coalition, Çavuşoğlu said, "Let alone not destroying [ISIS], it did not even halt [them]."

According to diplomatic sources, the foreign minister also held a phone conversation with U.S. Secretary of State John Kerry over the ISIS crisis and the latest development in Syria on Tuesday night.

Meanwhile, Iraqi Foreign Minister Ibrahim al-Jaafari arrived in Turkey on Wednesday to hold talks with Çavuşoğlu and it is reported that the agenda of the talks will be to ensure cooperation against ISIS and steps that can be taken in this regard.