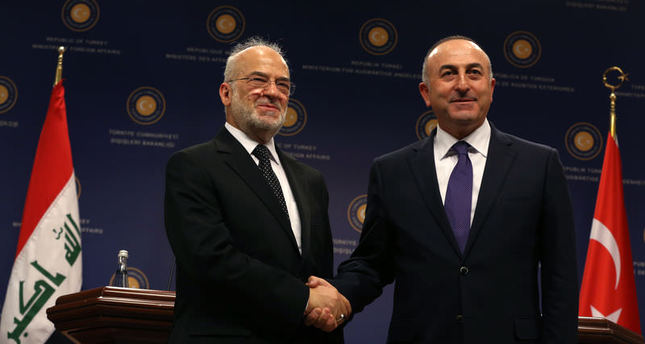 by AA Nov 06, 2014 12:00 am
A "new page" has been opened in Iraq-Turkey relations thanks to the new and inclusive Iraqi government, Turkish Foreign Minister Mevlüt Çavuşoğlu has said.

Çavuşoğlu's remarks came Wednesday at a joint press conference with his Iraqi counterpart, Ibrahim al-Jafari, who is in Turkey for a three-day visit.

"With this visit, we can say that a new page has opened in our relations. There is a much more inclusive government now and we expect it to embrace all Iraqi people," Çavuşoğlu said, referring to the new Iraqi government established on September 8.

The Iraqi parliament approved the new Cabinet on October 18, a move hailed at the time by Çavuşoğlu as "an important step towards an inclusive political beginning" that is essential for solving Iraq's crises."

"Our relations have deep, strategic roots," al-Jafari said, adding that although Turkey-Iraq relations suffered in the past, "we should leave the past in the past, and look to the future now. We should open a new page."

Çavuşoğlu explained that the problems that the two countries had in the past stemmed from the previous Iraqi government.

"We are pleased about this new and inclusive political opening," he added, and reiterated Turkey's support to Iraq in its fight against ISIS.

Al-Jafari said that the operation against ISIS was a national operation undertaken by the Iraqi security forces.

"We are against foreign troops. However, we are ready to accept all kinds of help offered to us," al-Jafari explained, as "this would make Iraq stronger in its fight against the ISIS."

"I hope that Turkey will continue its support to Iraq," he added.

Çavuşoğlu said that the Iraqi government had already taken some steps towards the restructuring of their security forces, and the defense and interior ministers had asked for Turkey's support in training and equipping Iraqi soldiers and police.

"We are going to give this support," he confirmed.

Çavuşoğlu also said that airstrikes alone would not be enough to eradicate the threat of terror in Iraq and Syria, and that the international coalition against ISIS had to come up with a "comprehensive strategy" to root out terror.

"If we say that we can fight terror without eliminating the reasons behind it, we would only be deceiving ourselves. This fight has three dimensions: military, political and humanitarian. And we are doing our part," he said.

He added that Turkey would continue to stand by Iraq to "protect its political unity and territorial integrity."

This is al-Jafari's first visit to Turkey since 2006, when he was then prime minister of the Iraqi transitional government.

The two foreign ministers also signed a memorandum of understanding with regards to the mutual abolition of visas for holders of diplomatic, service and special passports.