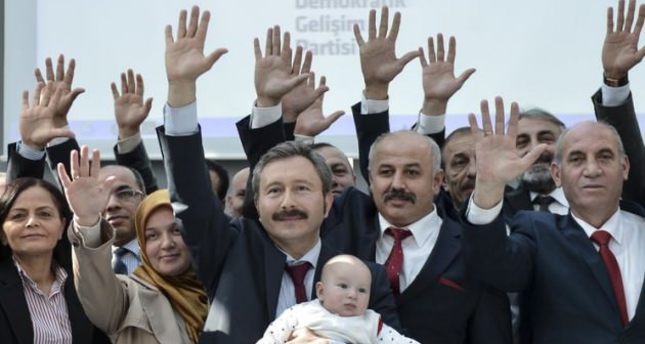 Gülenist deputies who parted ways with the AK Party following the Dec. 17 and Dec. 25 operations, which allegedly aimed to topple the government, have taken their first steps toward establishing their own political party.

İdris Bal, who now serves as an independent deputy, has submitted a petition to the Interior Ministry for the establishment of a new party called the Democratic Development Party. Bal said roughly two weeks ago that they were preparing to set up a new political party and emphasized that the party will include people from all strata of society. Speaking to journalists, Bal said that they had been working to set up the party for almost two years.

"We have been working on it for a long time with our friends from different backgrounds. Our work to set up a new political party has now reached maturity. We will explain further in due time," Bal said.

It is expected that the new party will aim to attract voters from center-right and center-left circles. Former Justice and Development Party (AK Party) deputies Hakan Şükür, Ertuğrul Günay, İdris Naim Şahin, Erdal Kalkan and Hasan Hami Yıldırım, who resigned from the party shortly after the Dec.17 and Dec.25 operations, are also likely to join the new political party. The operations were allegedly carried out by members of the Gülen Movement, who infiltrated the police and judiciary with the aim of overthrowing the government in late 2013.

Political analysts have given few optimistic reviews about the new party for the upcoming June 2015 election since its leaders and political program still remain unknown.

Turkish officials have reiterated that Gülenists, who formed an illegal structure within the government, should find legal ways to be engaged in politics in Turkey. One of these ways could be the formation of a political party.

President Recep Tayyip Erdoğan once implicitly addressed the leader of the Gülen Movement, Fethullah Gülen, during a meeting he held in February while he was prime minister. He called on him to return to Turkey unless he is involved in any wrongdoings and form a political party, instead of disturbing the country and disrupting its peace from miles away.

"Don't put the national security of the country under threat via provocative acts," he said.

Erdoğan also expressed his thoughts over the Gülen Movement's proposed establishment of a new political party after Bal tipped off media outlets about it. In response to a journalist's question, Erdoğan said that the decision to form a political party that will allegedly consist of Gülenist members was well founded, as the move, he said, will reveal their place in politics and how many supporters they have.

"They consider themselves as a legendary power constantly reiterating 'we have a large number of supporters.' We have to see if what they claim is true. It is beneficial to encourage such things." Erdoğan was quoted as saying.

Leaked voice recordings of Süleyman Hamit Müftigil, who is known as one of the people in the circle of imam Fettullah Gülen, described Bal and other Gülen-affiliated deputies as "saltshakers." In the leaked recording from last October, which took place two months before the Dec.17 operation, Müftigil clearly said that he is expecting great political turmoil in the coming months and that they are in preparation to establish a new political party: "I could even get a saltshaker in as a parliamentarian," implying that he could nominate any person he wants to be a deputy in Parliament. Müftigil also said in the recording that they would make a show of their influence in politics.

Meanwhile The Journalists and Writers Foundation (GYV), known to have close ties with the Gülen Movement, released a statement regarding the issue that read: "It is natural that an individual influenced by the movement's cultural accumulation chose by his own decision to be actively involved in politics. The principle of the movement that it will never form a party nor will it become engaged in any of the political parties should not be confused with individuals' choices to be in politics actively."

The foundation firmly stated that the movement had no links to any specific party whatsoever.

The foundation's statement, which has veiled support for the formation of a party, is interpreted as a cautious step to avoid any sort of defeats during the general elections that are set to take place in 2015, after experiencing consecutive disappointments in local elections on March 30 and the presidential election on Aug. 30.

The Gülen Movement, led by the U.S.-based imam Fethullah Gülen, is considered to be a national security threat by the Turkish government. Erdoğan has since accused the movement of wiretapping thousands of people, including Turkish government officials, encrypting phones and allegedly infiltrating state institutions including the judiciary and security forces with the aim of overthrowing the government. Erdoğan previously said that the movement will be included in the Red Book, and that fighting against the organization through lawful means will be one of Ankara's priorities.