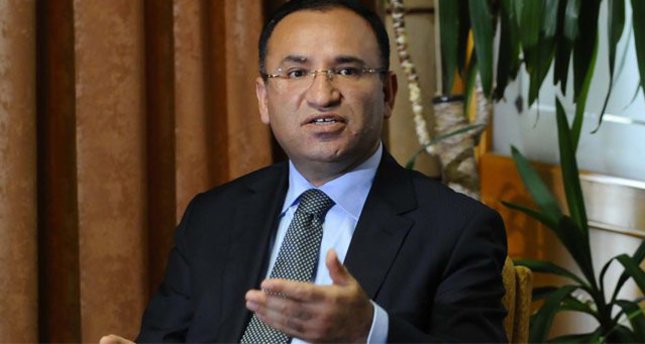 by daily sabah
Nov 06, 2014 12:00 am
Turkey's Justice Minister Bekir Bozdağ claimed on wednesday that the era of closing political parties in Turkey has ended, in response to questions about a possible closure of the Peoples' Democratic Party (HDP).

After the government criticized the HDP for its "harsh" and "uncompromising" political rhetoric following the party's call for street protests on October 6-7, which morphed into violent clashes between pro and anti-PKK groups and killed dozens of citizens, a HDP deputy asserted that the HDP will be closed.

He said that he does not think the closure of political parties in Turkey will acquire currency as the current situation favors democracy over tutelage and freedoms over restrictions. Likewise, he underlined the fact that politics should be conducted within a constitutional framework and said that the HDP should express its opinion rather than encouraging violence.

Urging the HDP not to fuel terrorist activities and vandalism across the country, Bozdağ said that what Ankara expects from the HDP is to adopt a softer and more compromising political rhetoric.

Criticized by political parties represented in Parliament, the HDP's call for street protests in early October triggered vandalism and killings, especially in southeastern and eastern Turkey, and the assassination of three off-duty Turkish soldiers by PKK militants.

In late October, the HDP issued a statement calling on people to take to the streets on November 1 as part of a global protest to support Syria's northern Kurdish town of Kobani, which is under siege by the Islamic State of Iraq and al-Sham (ISIS), but the November 1 Kobani protests ended peacefully.