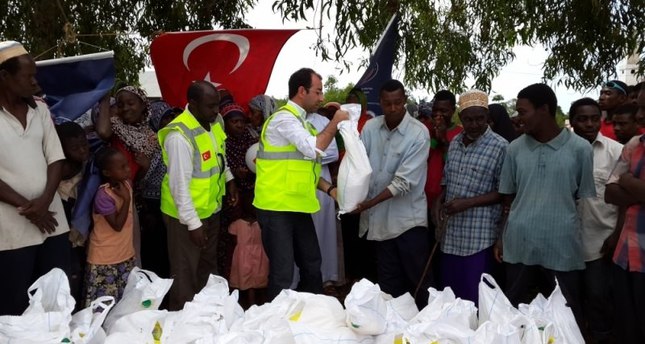 by AA Nov 07, 2014 12:00 am
Africa is the largest beneficiary of aid from the Turkish Cooperation and Coordination Agency (TİKA), according to a 2013 annual report released Friday.

According to the report, which examined the regional distribution of assistance implemented by the Turkish agency, Africa is the leading beneficiary, receiving 33.7 percent of aid, followed by South and Central Asia with 21.83 percent, the Middle East with 21.74 percent and the Balkans and Eastern Europe with 21.4 percent.

The data shows that the countries that receive the most assistance from the agency in 2013 were Palestine, Tunisia, Somalia, Afghanistan, Pakistan, Bosnia and Herzegovina and Montenegro.

The Turkish Cooperation and Coordination Agency was established in 1992 in order to support the restructuring, integration and development processes of ex-Soviet Turkic republics.

The agency carries out operations in more than 30 countries, primarily in Turkey's immediate neighborhood but also throughout the world. Meanwhile, Turkey's ambassador to Chad, Ahmet Kavas, announced that the agency would open a new office in the country's capital of N'Djamena.