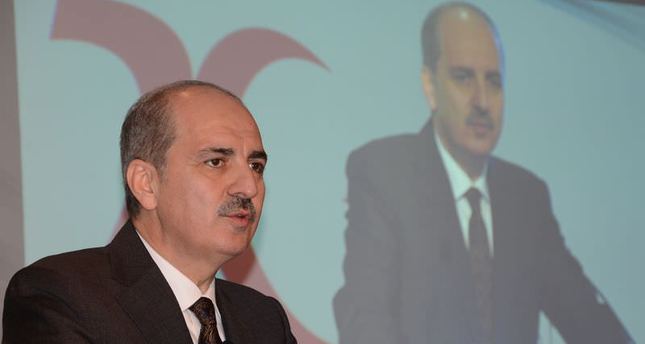 by Daily Sabah with AA
Nov 08, 2014 12:00 am
Turkey's Deputy Prime Minister, Numan Kurtulmuş, spoke about the rise of Islamophobia in a conference called "Austria and Migration: Turks in Austria in the 50th year", organized by Department for Turks Abroad and Relative Societies, as part of series of events he attended, in Vienna, Austria.

The Turkish Deputy PM commented on the rise of Islamophobia affecting Muslim immigrants in Europe. Deputy PM, Numan Kurtulmuş, shared his concerns on the Austrian coalition government's draft for a legislation intended to restrict the rights of Austrian Muslim immigrants.

"We hope and desire that the intended draft will be dominated by democratic standards included up till now and not dominated by the fears provoked by Islamophobia", said deputy PM, Numan Kurtulmuş.

In his speech, Kurtulmuş mentioned that fascism and racism is further increased, by promoting enmity and hatred against Islam, by certain dark focus groups in Europe and the west. Deputy PM mentioned that these groups attempt to portray Islam as a dark, uneasy, and religion of conflicts, however, "Islam is a religion of peace and soundness, not a religion that creates terror between people", Numan Kurtulmuş added.

Kurtulmuş added that Austrian Muslims have never been exposed to xenophobic discourses in the past. The Ottomans lived in Balkans for five centuries with peace - the Muslim history, culture, and the past does not have any events that include embarrassment, said Kurtulmuş, as part of his remarks in the conference, in Vienna, Austria.