Agony for older refugee generation, hope instilled by the new 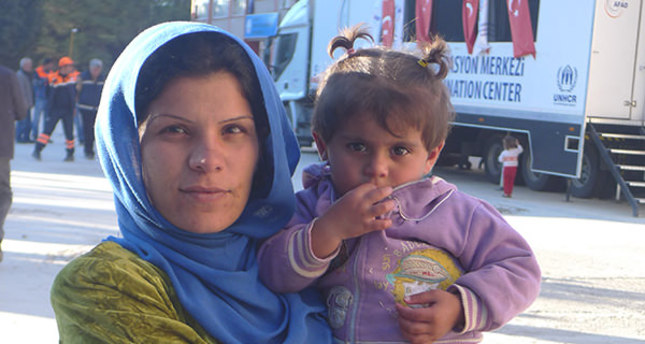 Naming their newborn babies Afad, after the Turkish aid agency’s acronym, and Michelle, after President Obama’s wife, Syrian Kurds in Suruç, Turkey are eager to share their stories with the world in an exclusive interview

'Homeless in their native lands, refugees in a neighboring country,' is how the world defines them.

Living only 15 kilometers away from their homes in Kobani, Syria, where most of the houses have been devastated by the conflict between the Islamic State of Iraq and al-Sham (ISIS) and Kurdish fighters, Syrian Kurds have no desire to cross back into their own land, which the rest of the world is unable to understand. These refugees have no choice but to be content with seeing bombs rain down on their homes every morning when they wake up.

After fleeing ISIS violence, 200,000 Syrian Kurds fled to Suruç, a town in the southeastern Turkish province of Şanlıurfa. On October 6, Daily Sabah paid a visit to the small town, which drew worldwide attention when it received one of the biggest Syrian influxes, which doubled the town's population, to evaluate how they are managing to get back to living a normal life.

You don't need to chase for a refugee story in Suruç since stories find you, either in a child's eyes or from a Syrian woman who has left all her belongings and loved ones behind. Nearly all Syrian Kurds fleeing ISIS have a story to tell and they are eager to share it with the entire world.

There are currently 80,000 Syrian refugees who are being accommodated in refugee camps in Şanlıurfa. These are mostly refugees who have no relatives in Suruç. Those who have relatives in Turkey either live in small villages with them or in houses arranged by them.

In every desolate building, three or four Syrian Kurdish families live together in the once quiet border district of Suruç. Laundry, including baby clothes and underwear, hang out in streets covered in dust. All open areas have been turned into a tent city – a term to define temporary refugee camps in Suruç.

Daily Sabah went to a dormitory called YİBO, allocated entirely for Syrian Kurds. There are nearly 20,000 Syrian Kurds trying to build a new life for themselves in this temporary refugee camp. The camp has four bathrooms located 50 meters away from the tents for all to share. Some Kobani refugees arrived in Suruç during the first day of the ISIS advance while others only crossed the border two or three weeks ago.

A Syrian woman grabbed my hands pulling me into the building, which was obviously where students once lived in bunk beds. A baby boy born only 10 days ago was sleeping in a cradle while his father Mohammed, 50, and his mother Zegra, 40, while his five siblings waited near the cradle.

Zegra told Daily Sabah that she named her baby Afad. When asked why she chose this name, she said that when they managed to arrive at the Turkish border after the 14-hour journey as a pregnant woman, the Directorate of Disaster and Emergency Management agency known by its initials, AFAD, provided them with blankets and some water as aid and helped them take a deep, safe breath.

"They helped us and we want to name this [refugee] baby Afad to show our gratitude," said the father, Mohammed.

The baby slept in his cradle, proving that there is always hope for humanity even in the worst situations that can befall mankind. 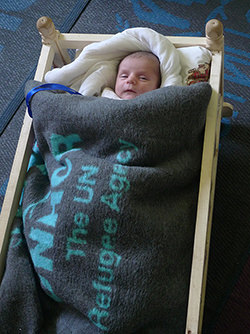 Mohammed said that they do not want to leave Turkey even after the civil war, which has metastasized with the ISIS advance, ends.

"I worked in Antalya before. I know Turkey. If they do not send us back, I have no intention to go," he said, contrary to the desire of some Kobani refugees who are willing to go back.

The same woman who took me to baby Afad pulled me aside and said, "There is another miracle next door."

This time we came across a baby girl in her mother's arms, born 15 days ago. The mother of the baby girl asked, "What is the name of Obama's wife?"

Surprised enough, I replied, "Michelle. Why did you ask?"

The mother, holding her baby girl with three others around said, "I want to name my girl Michelle, because when we heard that ISIS was only 10 minutes away from our village, the Americans bombed them."

One of her relatives continued saying that those 10 minutes gave them the opportunity to run and start their escape journey. 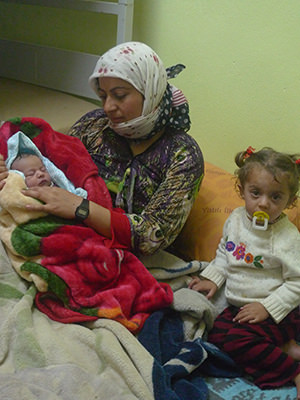 The mother of Michelle said that she had the worst experience in her life while trying to run away from ISIS for 17 hours as a woman expecting a baby.

"We walked without stopping for more than 10 hours. We were hungry. We were thirsty. We were exhausted. But we crawled in the times that we had no power to walk," said the mother of Michelle, thanking the anti-ISIS coalition led by the U.S.

With scores of children posing for Daily Sabah's cameras, we left the building and its miracles of nature. An 8-year-old Syrian child started signing a song he wrote about Kobani and the clashes there.

His song brought tears to the eyes of all Syrian mothers. It went, "Kobani the homeland, we will save you."

A 75-year-old woman, Halim, invited us to her tent and gave us some tea.

She said, "I wanted to go back to my country and take my last breath there."

One of Halim's children was an outlawed PKK militant who was killed while illegally crossing Turkey's border. The PKK is listed as a terrorist organization by Turkey, the U.S. and EU for taking up arm against Turkey to carve out an independent Kurdistan in the southeast. Even though she described her son as a "member" of PKK, she did not refrain from thanking Turkey for opening its border to Syrian Kurds. 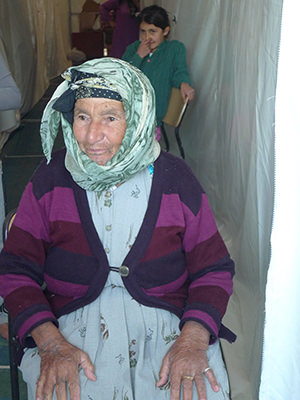 An old Syrian Kurdish man, Ahmad, 80, who was standing there told me immediately in Turkish, "Kurds, Turks, we are all brothers."

His words showed that the long-running Kurdish question in Turkey that has killed thousands has already been eased by all the agonies in the district as the reconciliation process between Ankara and Kurds aims to end the conflict peacefully.

Beside Halim's tent, a young Syrian Kurdish woman with wrinkles on her face as the evidence of her exhausting life in Syria, told Daily Sabah that her nephew – her uncle's son – was captured by ISIS militants and kept in jail for two months while she beat red peppers to make a hot spice "isot," specific to Urfa, as if she was spilling out her hatred toward ISIS with each beat.

She described her nephew's terrible experiences: "They pulled out his teeth. They cut his ear and some of his toes, but he managed to run away after all of the torture."

Daily Sabah tried to confirm this story and torture with an interview with her nephew, but she said that no one knows where he is since he tries to hide for security reasons.

As all Syrian Kurdish refugees wait to tell their stories, local people also wanted to share the story from their own side of Suruç.

A local woman, Asiye, a 35-year-old mother of three, told Daily Sabah that they even gave the couches in their home to Syrian refugees living in villages, but she added that their arrival has caused conflict in the once quiet city of Suruç.

Asiye explained that it is was so horrifying that people forgot to take their children with them and tried to save their own lives first.

"I think ISIS scared people so much that they behaved as though Armageddon had arrived in Kobani," she added.

In Şanlıurfa there are some wealthy renowned tribes that have influence on the locals. A head of a well-known tribe, who spoke under the condition of anonymity, said that he gave five of his houses in Suruç to Syrian Kurds.

"I am taking care of nearly 200 Syrian Kurds. I gave them homes, blankets, money and some urgent needs. They are so humble that they do not accept more than one blanket even though they need them. They can stay as long as they want," he said, adding that the reason why he did not give his name is the Islamic belief that "Even the right hand does not know the help given by the left one," a direct translation from Turkish, to stress that help given for the sake of God should be done anonymously.

Another head of a tribe is not as optimistic as the other. He said, "I have been looking after a Syrian refugee family for one year. But this civil war does not seem to be ending any time soon. They should find a job. How long can I take care of them?"

Sharing even their bread with Syrian Kurds, the locals seem to embrace the refugees even though they complain from time to time. Şanlıurfa locals do not forget to call on the international community to extend aid and to hear the voices of refugees rising from Kobani.

Hiding under the dust covering Suruç and the camps in it, heart-breaking stories always find a way to make themselves heard. Simply looking in their eyes will tell the agony Syrian Kurds have is beyond all of the political rhetoric that we have heard for months.