Gülen Movement did not manage to seize judiciary in HSYK elections 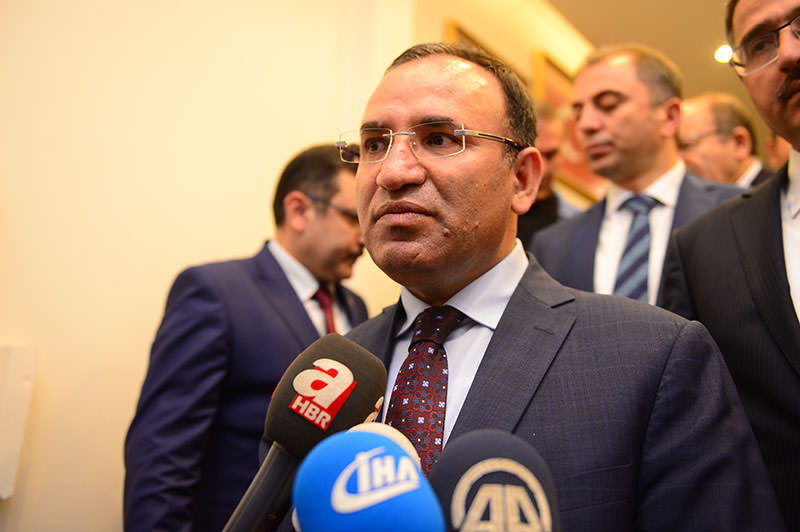 The Supreme Board of Judges and Prosecutors (HSYK) election that took place last month received both praise and criticism from different groups with the former asserting that it set an example for an independent judiciary while the latter claimed that the government was assuming control over the judiciary. With the latest developments in the reconciliation process, concerns about the new judicial reform package and the current situation surrounding arrested journalists are all important topics on the agenda. Daily Sabah spoke to Bekir Bozdağ, the minister of justice, regarding the aforementioned topics.

Daily Sabah: Could you inform us about your opinions on the latest developments concerning the reconciliation process?

All people in Turkey want the reconciliation process to be successful. As the government, we are emphasizing the elimination of violence in Turkey, the termination of terrorism and the establishment of social solidarity. We have put these issues in our government program; we have been working on it. We have made laws and established a commission in the national assembly. Day by day, these have increased the people's support for the process. Everybody wants the elimination of violence, the dissolution of terrorism and peace, as we also do. Due to these changes, we have come a long way.

However, we have observed that the HDP [Peoples' Democratic Party] committee's actions don't correspond to their discourse, something that was revealed in Kobani and several other incidents. Their statements contradict their actions. They talk about peace, democracy and fraternity, but on the other hand they are somehow involved in the lynching of Yasin Börü, who was just 16 years old and was not involved in the protests, and also in the ravaging of the streets. We cannot understand why they resort to violence while there is the reconciliation process. We are implementing this process to end the violence in Turkey.

We are saying that the HDP should position itself against violence, as we do. We are highlighting the state's unity when we talk about the process. We want to establish public order and peace in the southeastern region of Turkey as it is in the cities. We know that the reconciliation process can only function with the establishment of public order.

For this reason, we will maintain the reconciliation process; all the ploys that violate public order will be faced with justice and security forces that are authorized. If the HDP committee evaluates themselves, we will evaluate the situation accordingly.

DS: After the incidents on October 6-7 and the HDP's contradictory statements, comments emerged which asserted that the reconciliation process will be updated with a more security focused approach. What are your opinions on this subject?

The process is a dynamic one and it continues to go on with all the positive and negative contributions of everyday Turkey. Therefore, it is only natural that the situation is constantly re-evaluated by us. Our government is determined to maintain the process and law enforcement if there is violence.

The proposed law that will be forwarded to the assembly includes some changes regarding security. This is important in reflecting the determination of the application because we believe that this process is not possible without providing security. All rights can be gained when there is public order. We will not allow the destruction of public order and security.

DS: How do you respond to the allegations that the newly elected board members in the HSYK elections are close to the government and that the judiciary is under the control of the government?

In the HSYK elections 14,000 judges and prosecutors voted freely after a democratic propaganda process. A board that is undeniably democratic was established after the elections. Nobody with a conscience could say that this institution is under the direct control of the government. All of those elected are successful and proven legislators; they were elected due to their merits. The elections are unassailably legitimate.

People who are exacting a smear campaign on the new HSYK members have not come up with an explanation to Gulenists' attempts to command the judiciary. They have represented Gulenist candidates as independent legislators, while I, as the minister of justice, you as the media, and also the very authors of these allegations, knew very well that this was not true.

However, the judges and prosecutors did not allow this smear campaign to take a hold on them. They have protected justice, supremacy of law, and the independence of the judiciary. By this way they have stated that they are independent and bound to their conscience, not related to a structure or a community that tries to overtake the state. They did not allow the law to turn into Gulenist law. They have embraced the people's law and the supremacy of law.

DS: There was criticism of the judiciary in Turkey, especially from the EU, due to what has been happening since December of last year. As the government, to what extent did you convey your concerns to the judiciary? After the recent HSYK elections, are your contacts in Europe still concerned?

In the past, terrorist organizations such as the DHKP/C [Revolutionary People's Liberation Party-Front] and PKK supporters or groups were spreading propaganda against Turkey, and they still continue their support. After December 17, some Gulenists also started to do this. They go to international institutions and organizations and spread propaganda against Turkey. Their only goal is to obtain negative comments about Turkey. When they are successful, they act triumphantly. Would a person who loves his country do this?

Our friends in Europe were, unfortunately, affected by this. At first, they could not understand what was happening in Turkey. They could not comprehend that there was a coup attempt under the guise of corruption. They were presented with allegations that stated that the government is corrupt and is trying to protect itself. Of course, these allegations were an opportunity for people who dislike Turkey, President [Recep Tayyip] Erdoğan and the government.

However, Turkey's real friends tried to understand these events and we have explained it to them. In a meeting with Stefan Füle, who is the EU expansion commissioner, I was talking about these events. I asked him what would he do if he was a minister and had to deal with unruly personnel who act according to their own agendas. He said that naturally, he would not work with that personnel. He even said that similar events have taken place in his country, the Czech Republic, in the transition from communism when there was a group that tried to delay the transformation and how they had tried to deal with this situation.

Judges and prosecutors are free to have political opinions and be attached to religious sects, this is natural. However, their attachment's interfering with their duty is not acceptable. What Turkey does is to essentially protect democracy and justice against these kind of people. Because in our parliamentary democracy, the government is elected by the people and serves in accordance with the Constitution and laws. Bureaucrats are under the command of this government. However, if the work is done according to a community's approval rather than the government, of course you will try to protect the state, the people, and the constitution against them. This is what our government is doing.

DS: Do you think that there is still a negative attitude toward Turkey?

I can state that negative attitudes toward Turkey is declining. People can now easily see the smear campaigns as transparency increases. The Gulenists are perceived as a group that offers religious services and education. I am asking if they are as benign as they claim, why would they wiretap various governmental institutions and bug people's homes and offices?

No country lets any other force than itself to determine and administer its policies. Because this authority is lent by the people to the government. We will not share it with any organization or community.

DS: Another subject on the agenda is the new judicial reform package. There are allegations that with this package "reasonable doubt" will become a sufficient cause for imprisonment and the government will put every suspect under investigation. How do you evaluate this allegation?

The "reasonable doubt" clause was an application that was present in the Turkish legal system for many years until last February. With a change in February, we imposed a condition to imprisonment and search warrant, which was the existence of strong evidence. However, this amendment caused issues in application and security gaps. Some of our prosecutors interpreted "concrete evidence" only as evidence that proves the crime and did not give search warrants because of that. We have identified a security gap due to the faults in application regarding the recent killings of two policemen in Bingöl. We are bringing back the old system to eliminate this kind of application mistake.

DS: How do you respond to the allegations that this new regulation is against EU standards and European Court of Human Rights (ECtHR) laws?

With this new judicial reform package there is also an improvement to rights and freedoms, which is a law regarding lawful interception. We are making it harder to intercept with the new regulations, which will need a consensus by the heavy penal courts. This will make it difficult to get a warrant for interception. As the government, we do not wish people to be intercepted. There has been a decline in lawful interception by 80 percent in 2014 when compared to the previous year.