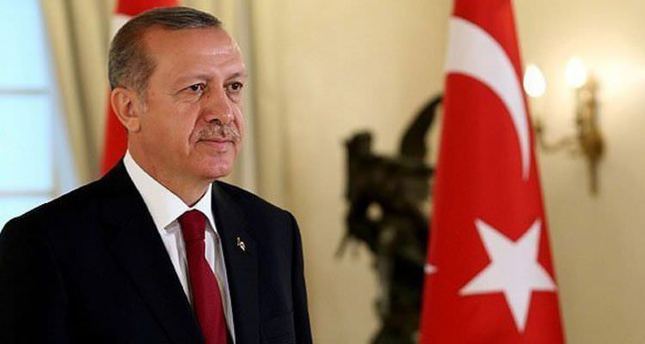 by daily sabah
Nov 09, 2014 12:00 am
Turkish President Recep Tayyip Erdoğan has said that the reconciliation process in Turkey has no specific side, and addresses the needs and grievances of the entire nation, regardless of ethnicity. He made the comments following his visit to Turkmenistan.

The reconciliation process is an ongoing peace deal between Ankara and the country's Kurds to end the violence through democratic means. Erdoğan, in a question and answer session with journalists during his return from his visit to Turkmenistan, elaborated on issues that have been a hot topic in both the national and international agendas.

Noting that the government first launched the process as part of democracy initiatives before later ascending it to a project called National Unity and Brotherhood, Erdoğan said it was wrong to place Kurds on one side of the reconciliation process and the government on the other. "No ethnicity can be deemed as a 'side' regarding the process. Indeed it is the whole nation the process addresses. The entire Turkish population should embrace it to speed up reaching a conclusion in the process. We cannot tolerate [any attempts to cripple the process]," Erdoğan was quoted as saying.

He added that Turkey will not leave the country "in the hands of those assaulting with sticks," alluding to the protesters that were involved in violent aggression during the deadly protests that claimed dozens of lives, mostly in southeastern Turkey.

Roughly a week ago Turkey was shaken by violent protests that took place in various provinces mostly in the southeast of the country. The protests which were staged in support of Kobani quickly morphed into violent clashed between Kurdish radicals and anti-PKK Kurdish groups.

The protesters claimed the Turkish government should have actively interfered to halt the advance of the Islamic State of Iraq and al-Sham (ISIS) in the Syrian town of Kobani, also known as known Ayn al-Arab, just across the Turkish border.

Peoples' Democratic Party (HDP) Co-Chair Selahattin Demirtaş called on his supporters to pour onto the street in support of Kobani, in a perceived attempt to hamper the reconciliation process that has been proceeding in a healthy manner. The PKK assaults which followed the deadly protests strained already tense relations with the parties and raised questions over whether the reconciliation process is coming to an end. The government officials, since then, have been reiterating that the process has resumed despite attempts to obstruct it.

The ruling party has reassured the public over the issue at every chance, saying they would abide by the process under every circumstance. Erdoğan also touched upon various other issues that have been occupying Turkey's agenda, one of which is the recent Presidential Palace debate. Responding to criticism voiced by Turkey's opposition parties claiming the cost of expenses were "excessively high" and the palace was too lavish, Erdoğan said there was a need for such a presidential palace and that the palace belonged to the nation itself.

"I never resided in an official house when I was prime minister, a fact that some media outlets fail to see," Erdoğan said.

He also shared his thoughts on Gülenist deputies' steps to establish a new political party saying the decision was well founded.

"It is beneficial that people from every section can form a party. This way we can see everything in a clear way," Erdoğan said