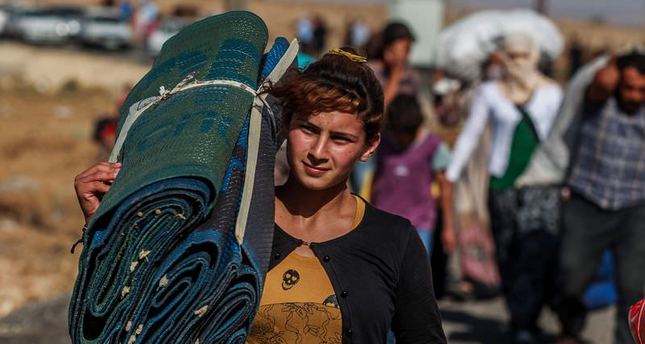 Amid all the agony in Şanlıurfa’s small town of Suruç with Syrian Kurds fleeing ISIS, the Turkish aid agency, AFAD, along with international organizations and NGOs, tries to meet the necessities of refugees for a glimpse of a moment of happiness from them

Trying to carve out a new life only 15 kilometers away from their homes in Kobani, once one of the most fertile of Syrian lands, Syrian Kurds who fled their homes now need a permanent roof over their heads in which they can safely sleep at night. Even though it is not possible to see them safe and sound in their destroyed homes that have become only cheerful memories, the Turkish Directorate of Disaster and Emergency Management (AFAD) is doing their share to meet Syrian Kurdish refugees' urgent needs before winter comes to Turkey's southeastern province of Şanlıurfa.

Daily Sabah went to the small Şanlıurfa town Suruç on October 6 to observe the conditions of refugees from Kobani and assess to what extend their necessities are being met by both international organizations and Turkish authorities that are extending a helping hand in the town.

Although a look into a refugee child's eyes is enough to see their agony, a pair of baby boots or a diaper allows one to see a moment of happiness in the same eyes and shows that extending a helping hand is not only one country's or one organization's duty, but an international responsibility.

Every desolate building and open area in the district has been allocated for Syrian Kurds, doubling the population of the district with their arrival. Suruç, once known as a quiet border district, has witnessed a rush and is crowded these days.

Mahmut Sönmez, the head of AFAD in Şanlıurfa said that the refugees coming with the latest influx are being accommodated in temporary refugee camps for now, but a permanent one will soon be built by AFAD before harsh winter conditions come to the southeast.

When asked how they handling one of the largest influxes of refugees with the arrival of 200,000 Syrian Kurds waiting at the Turkish border, fleeing ISIS, Sönmez said that AFAD is delivering water, some blankets and basic needs to the refugees as aid.

Sönmez said that there are three tent cities and one container city in Şanlıurfa to accommodate the refugees crossing the border.

As a first stop to obtain information, Daily Sabah went to the Suruç governorate. Hosting us in his office, Suruç Governor Abdullah Çiftçi said that the district is the most crowded it has ever been in years. Çiftçi said that aid, including blankets, meals and medicine, have poured into the city as officials in the district deliver them to families on a daily basis.

The governor touched on an important issue for Syrian children whose education has either been interrupted or not covered due to the civil war and ISIS advance. He said that nearly 2,000 Syrian children will be educated in the surrounding schools in the areas they now live.

"They will go to the school around their camps and homes after 2:00 p.m. There are Syrian teachers fleeing Kobani and they will be assigned to those schools. Syrian children will be educated in their native languages," added Çiftçi, noting that there is a huge demand from Syrian refugees to learn Turkish and there are also some Turkish classes to meet the demand.

Çiftçi said that only 200 of the refugees have returned to Kobani to fight against ISIS militants and added, "In the first days, some people went back to Syria, but then it turned out that the reason why they returned was to pillage, and that is why border crossing was restricted."

Following our talk with the governor, we headed toward AFAD's logistics base in Suruç where aid is distributed to the refugees. The base is filled with blankets, beds and food aid and AFAD officials said that the aid packages are distributed to refugees by truck with no delay. They added that AFAD asked the UNHCR to monitor distribution and every blanket given to Syrian Kurdish refugees is registered by the state agency.

"We are trying to deliver the aid to those who are in need without skipping a single refugee," said AFAD officials.

Three times in a day, Turkish Red Crescent officers cook meals for Syrian Kurdish refugees in huge pots in the logistics base and the meals are delivered by officials in trucks to both those in refugee camps and in abandoned buildings.

Health Ministry officers also stand ready in this logistics base near the border and with each alert they arrive at the border and sometimes enter Syria to take wounded Syrian Kurdish fighters battling ISIS militants back to Suruç for treatment. During our time there we witnessed two ambulances heading to the border. According to health officials, more than 1,000 Syrian Kurdish fighters from Kobani have been taken to Suruç for treatment.

Considering the possibility of an epidemic, Health Ministry officers and some doctors work every day to assure the health of refugees. The town has the huge number of refugees, of which there are thousands of young children. Due to overcrowding and tough living conditions with a limited number of bathrooms in refugee camps that are used by thousands of refugees and due to the inevitable physical interaction between refugees as the town's population doubles, health monitoring is a must in the camps.

Dozens of health officers in the camps have taken responsibility for the duty of monitoring and providing the required medicine to those in need.

Likewise, the crowd may pose a risk for public order and the security of both the Syrian Kurdish refugees and locals in Suruç.

"Despite thousands of refugees arriving within a single day, there is no safety hazard in Suruç for now," said police officers in their comments to Daily Sabah, adding that there has been no increase in the crime rate.

Hundreds of officials from government agencies, international organizations and nongovernmental organizations in Suruç spend their days trying to elicit one happy look from refugees and do the best they can to make refugees' lives easier by the day. The only reason behind the cooperation and solidarity in Suruç is to build brighter days for Syrian Kurds in this small town.