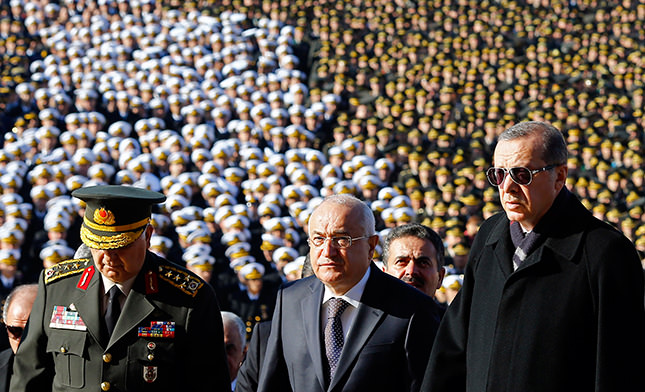 by AA
Nov 10, 2014 12:00 am
Turkey's President Erdoğan and Prime Minister Ahmet Davutoğlu expressed their gratitude to Atatürk and his heritage for the country, during their speeches in Ankara on Monday.

Speaking in ATO Congresium Hall in Ankara, Erdoğan said Atatürk will have a place in the new Turkey as a commander, parliamentary speaker, founding father of Turkey's republic, president and a man who was in love with the national will.

"There is only one Atatürk, but we have unfortunately witnessed the wearing out of his spirit through history by different Kemalist interpretations," Erdoğan said. "Personally, one of my greatest desires is that Turkey's youth view Atatürk solely as a great leader."

Speaking in the same event Ahmet Davutoğlu said Atatürk was a special leader who left a mark on history with his self-confidence.

"His most distingushed trait was his self-confidence," Davutoğlu said. "When the [British] invasion fleets approached the Bosporus, and Istanbul harbor, when everbody was in dismay, Atatürk said: 'As they have come, so they will go,' to show no invading army can ever rule over these saintly lands." Those remarks were made after British troops landed in the city on November 13, 1918.

The prime minister said that the second most important qualification of an important leader is the trust they receive from their people.

"When İzmir was being invaded, Atatürk went to Samsun and said, in the Amasya Circular, that the future of our nation will be decided by its people," said Davutoğlu. "That shows the trust he had in the nation."

The Amasya Circular is a joint statement issued on June 1919, declaring Turkey's independence, and acknowledging that the country was in danger. The circular was the first written document which sparked the War of Independence.

The prime minister also explained that the third most important qualification for a leader is to read history correctly.

Davutoğlu mentioned that after the First World War, empires began to fade away.

"Gazi Mustafa Kemal never settled for a mandate system, he always wanted full sovereignty," he said. "I would like to pledge our determination once again on pursuing a brighter future for the Republic of Turkey, which Gazi Mustafa Kemal entrusted to us."

Born in 1881 in Thessaloniki, in what was then the Ottoman Empire, Atatürk made his military reputation in 1915 as a successful officer during Allied attacks on Canakkale, known in the West as the Dardanelles.

Following the empire's dissolution after World War I, Atatürk led the Turkish War of Independence, defeating forces sent by European powers. He founded the Turkish Republic and during his presidency, he worked to transform the former Ottoman Empire into a modern and secular country.

Atatürk, promoted secularism, implemented western alphabet, and reoriented the country toward the West.