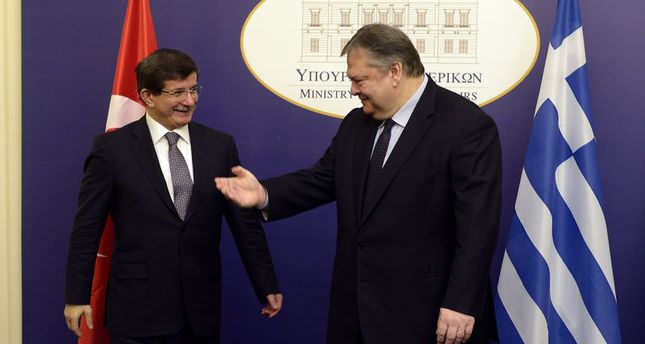 by AA Nov 10, 2014 12:00 am
Prime Minister Ahmet Davutoğlu will visit Greek capital Athens on December 5 and 6 to attend a bilateral cooperation meeting, the Turkish Foreign Ministry announced in a statement on Monday.

The announcement comes at a time when Turkey and Greece are said to be at odds over the divided island of Cyprus and peace talks to resolve the issue have stalled.

The Greek-Cypriot administration suspended talks over the divided island on October 7 when Turkey sent a warship to monitor a Greek Cypriot oil-and-gas exploration mission off the coast of Cyprus, which the Greek Cypriot side claimed came under its Exclusive Economic Zone.

The Greek-Cypriot side submitted a formal complaint against Turkey during a European Council meeting in late October over Ankara's move.

Negotiations between Turkish Cypriots and Greek Cypriots had resumed after a two-year pause in February 2013. The previous round of talks had collapsed partly because of the Eurozone debt crisis' impact on the Greek Cypriot administration.

Turkey is opposed to any unilateral Greek Cypriot move to explore hydrocarbon resources around the island. It insists the island's natural resources should be exploited in a fair manner under a united Cyprus.

Talks over the future of the island remain dogged by the small country's troubled past.

In 1960, a "Treaty Concerning the Establishment of the Republic of Cyprus" - commonly known as the "Treaty of Guarantee" - was signed between Turkey, Greece and the United Kingdom.

The treaty banned the island of Cyprus from participating in any political or economic union with another state as well as making other party guarantee its independence, territorial integrity and security.

However, in 1963, only three years after the treaty was signed, Turkish Cypriots were ousted by force from all organs of the new republic by their Greek Cypriot partners, which violated founding agreements and the country's constitution.

Greek Cypriots, thereafter, claimed to represent the "Republic of Cyprus," which was considered illegal by Ankara and remains unrecognized by Turkey.

Between 1964 and 1974, the international community made several peacemaking efforts, all of which ended in failure.

In 1974, an attempt was made by Greek Cypriots to forcibly join the island to Athens through 'enosis' [union] via a coup attempt. This was resisted by an armed Turkish peace mission in accordance with the 1960 Treaty of Guarantee.

Consequently, Turkish Cypriots set up their own state in the north of the island in 1983, recognized by Turkey, while continuing the search for reconciliation.

The European Union recognizes the Greek Cypriot administration on the island.

In 2004, Cypriots went to the polls to decide on the so-called 'Annan Plan', which was a UN proposal to resolve the dispute by restructuring the island as a 'United Republic of Cyprus.' In effect, it proposed a federation of two states that aimed to unify the Turkish Cypriot and Greek Cypriot communities.

The proposal was revised five times before it was put to a referendum in April 2004 and was supported by 65% of Turkish Cypriots. However, only 24% of Greek Cypriots backed the plan, claiming that the proposal favored Turkish Cypriots, so the stalemate continued.

The second meeting of the Turkey-Greece High-level Cooperation Council was held in Istanbul on March 4, 2013. The council had its first meeting on May 14, 2010 in Athens.