UNHCR spokeswoman: ‘We are calling on the int’l community to increase support to Turkey’ 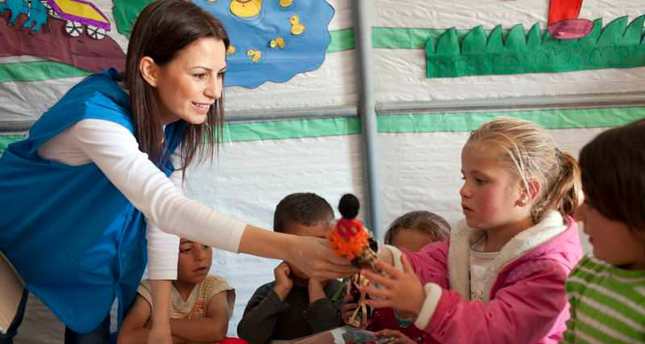 by Sena Alkan Nov 10, 2014 12:00 am
Taking on the burden of more than 1.6 million Syrian refugees since the outbreak of the Syrian civil war, Turkey with the help of international organizations is doing its share to ease the lives of refugees. Daily Sabah spoke to U.N. High Commissioner for Refugees (UNHCR) spokeswoman Selin Ünal regarding the action plans for Syrian refugees, projects for Syrian women and children, Turkey's latest criticism of the U.N., and how the refugees' stories most affected her during her post at the UNHCR.

DS: How are Turkish state agencies and UNHCR handling the refugee crisis in Turkey? What kinds of projects are there and what is on the agenda for the upcoming term?

Selin Ünal: Turkey is at the center of refugee movements due to historical and geographical reasons and has witnessed different migration movements, opening doors to those seeking refuge. For the last 54 years the UNHCR and Turkey have been working together in close partnership.

The Republic of Turkey is party to the 1951 Refugee Convention and 1967 Protocol maintaining the geographical limitation restricting its obligations to refugees seeking protection due to events that occur in Europe. Since Turkey restricts its obligations to "European refugees," asylum-seekers who have fled due to the events beyond European borders are granted "temporary protection" in Turkey. This temporary protection is extended pending the UNHCR's efforts to secure a solution for them elsewhere. In order to identify the people in need of international protection, the UNHCR conducts refugee status determination (RSD) under its Mandate for non-European asylum-seekers in parallel to the national procedure for temporary asylum. Currently, there are close to 180,000 people of concern to UNHCR in Turkey.

While maintaining the geographical limitation to the 1951 Convention relating to the Status of Refugees, it is very important to praise the Law on Foreigners and International Protection that was adopted in April 2013, which provides a comprehensive framework for protecting and assisting all asylum-seekers and refugees regardless of their country of origin in line with international standards.

For the Syria crisis, it has been over three-and-a-half years since the conflict started and there are now over 3.2 million Syrians who have become refugees and who are hosted mainly in neighboring countries. Turkey is one of them, and according to figures given by Turkish authorities, Turkey is hosting the biggest number of Syrian refugees in its territory.

Turkey has declared "Temporary Protection Status" for Syrian asylum seekers. This is an internationally recognized legal status. It means that a great number of people have arrived and these people are in need of protection. Turkey was the first country to declare this status. Turkey has said that it will accept and protect Syrians and has been its actions are consistent with its remarks for the last three-and-a-half years. Therefore, we, as the U.N. Refugee Agency, are very grateful to Turkey and Turkish people.

Since the beginning of the Syrian crisis when the first Syrians sought refuge in Turkey in April 2011, the UNHCR has been closely cooperating with Turkey and leads and coordinates the efforts of U.N. agencies in Turkey to support Turkey with its response to the Syrian humanitarian crisis. UNHCR staff is present on a regular basis in all refugee camps so as to provide technical assistance for registration, camp management, identification of vulnerabilities, voluntary repatriation and other protection concerns.

We are coordinating with the authorities on the needs [of refugees], projects to be done together and how to shape our response. So in addition to our technical support, we extend assistance regarding shelter, winter needs, food, vocational training and items for people with special needs. The majority of the [refugees] are not inside the camps, so registration of them in order to identify vulnerabilities, needs and so on is very important. Thus, through discussions with the authorities, the UNHCR supports Turkey's efforts for the registration of Syrian refugees living outside the camps among others through the donation of 34 mobile registration centers, including identification of any particular protection needs and extreme vulnerabilities.

Winter is coming, so specific planning for the coming winter has been made. Our winterization plan targets assistance to 300,000 refugees in host communities and some 120,000 refugees in camps. In total, if fully funded, 84,000 families will benefit from winterization assistance. The plan includes distribution of high thermal blankets to 84,000 families and winter clothing to a targeted refugee population of 60,000 households – 300,000 people – not living in the camps. The winterization program also foresees the replacement of 7,000 tents in camps as well as the provision of 8,500 electric heaters.

The target population has been revised on the basis of discussions with the government of Turkey and nongovernmental organization partners. The current plan will provide assistance to all refugees in camps – up to 230,000 people – as well as 300,000 refugees in urban, semi-urban and rural areas. Winter clothing for all 530,000 refugees have been procured and delivery is expected from mid-November to mid-December. Distribution in the camps will be done by AFAD [Directorate of Disaster and Emergency Management], while the distribution to refugees in local communities will be done by our partners.

The U.N. and its partners work in cooperation with host countries to identify and respond to the needs of Syrian refugees. The UNHCR leads and coordinates the efforts of other U.N. agencies and humanitarian assistance partners participating in the Regional Response Plan (RRP) to support the Syrian emergency response. In this context, within the framework of the Syria RRP, the international community is called upon to demonstrate solidarity and support. Current funding levels of the RRP are unfortunately low, especially for Turkey. To be able to respond to the needs of the vulnerable, we obviously would need more and robust support from the international community, which, as said before, is unfortunately not enough so far. By only receiving support from the international community we can better place ourselves to respond to the urgent needs of Syrian refugees.

Since the beginning of the Syrian crisis, thanks to support from donors, the UNHCR's total support for Turkey's response has reached $177.5 million and has been directed toward Syrian refugees both in and outside of the camps. It has been over three-and-a-half years and according to authorities, some 1.6 million Syrian refugees are in Turkey, of whom the majority is living outside of the camps. It has been a very long time and very big number of people. As we always say, responding to a refugee crisis is an international responsibility and showing solidarity can take different forms, not only through funding support. We are asking for support for other forms of protection that include family reunification, a humanitarian admission program, extending student visas, offering scholarships, all of which are different kinds of mechanisms that could allow for the admission of more Syrians.

DS: Is there any project that is specifically directed to Syrian children and women to prevent any possible social, psychological and sexual abuse?

SÜ: UNHCR staff is present to support the officials on a regular basis in all refugee camps so as to provide technical assistance on identification of vulnerabilities and all matters related to protection. In addition, UNHCR Turkey supports community centers to provide assistance and services to the Syrian refugee population not in camps. The community centers are a priority operational area for UNHCR and at the core of its urban outreach strategy. The range of services delivered by the centers is cross-cutting in nature and engages protection, basic needs, informal education, health, psycho-social support and livelihood assistance and services.

DS: The U.N. has been criticized by Turkish officials who assert that it does not give enough help to Turkey in its attempt to cope with the refugee crisis? What is your comment on this issue?

SÜ: We are grateful to Turkey for the protection and assistance provided to some 1.6 million Syrian refugees for over three-and-a-half years as well as to the donors who have supported our response to the Syrian refugee crisis. However the funding level for Turkey's requirements within the RRP6 currently stands at 28 percent. The planning figure for the end of 2014 in RRP6 was 1 million Syrian refugees in Turkey. Now in November 2014, we are already talking about an estimated 1.6 million refugees in Turkey, of whom some 900,000 are fully registered. In this context, we are calling on the international community to increase its support to Turkey to respond to the quickly growing needs of so many refugees now that they will soon be facing winter.

Responding to the needs of refugees requires international responsibility. Therefore, we strongly call on the international community to step up their assistance and show their solidarity with Turkey and other countries in the region who have been generously hosting over 3.2 million Syrian refugees for over three-and-a-half years.

DS: It is a personal question, but I cannot refrain myself from asking. You do not have to respond this, but among all those Syrian refugee stories, which one most affected you?

SÜ: Being a refugee is a very difficult situation. We are talking about people who have to leave behind their family members, memories, lives, property – everything – and they find themselves in need of international protection. The Syrian situation has become one of the largest displacement crises in the world. In this crisis where the solution is political, we continue our support to reduce suffering and needs through humanitarian assistance. In the fourth year of the conflict, when we speak to Syrian refugees in Turkey, they reiterate their gratitude to Turkey. We see in their eyes the hope to return to their homes in the future and they express this. All of the refugees I have spoken to so far have very touching and tragic stories. I was very much affected by a small 5-year-old girl who was showing us her doll and then said this is not her favorite doll that she sleeps with every night. She said she wants to go back home to have her doll, since only then will she be able to sleep peacefully. Then she asked us if we can help to go and get her doll from her home in Syria. This is just one instance from a child who simply and rightly expressed her desire to be back home.

At least half of the Syrian refugees are children. We are talking about some 1.6 million refugee children in the region. We are, together with our partners, calling for governments, aid agencies and members of the public to support a "No Lost Generation Strategy" to protect a generation of Syrian children from despair, diminished opportunities and a broken future.