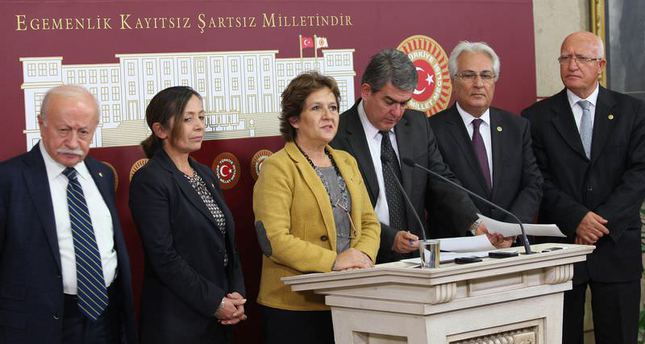 Most recently, İzmir Deputy Birgül Ayman Güler has requested Kılıçdaroğlu and his team to resign for poor administration skills, while Enver Aysever, a producer, author and former CHP member, harshly criticized the CHP for imitating the Justice and Development (AK Party), which has previously been criticized by political analysts.

"I call upon the party administration and Kemal Kılıçdaroğlu to resign before the 2015 general elections for the sake of the CHP's success," Güler said speaking at a two-day event organized by the CHP in Germany. She argued that the referral of Eskişehir Deputy Süheyl Batum to the party's disciplinary committee with a request for his dismissal was unacceptable as she claimed he was a hard-working and devoted member of the CHP. "It is crucial for the party to make a public statement and explain why they are maltreating Batum" Güler said, emphasizing that mistakes have added up and it is about time that the party take action in this respect. More importantly, she asserted that the resignation of Kılıçdaroğlu and his administration is necessary for the party to gain strength and win elections.

On a different note, Enver Aysever harshly criticized the CHP for organizing an event in Yeni Cami (the New Mosque) in Istanbul where the Quran was recited to commemorate the death of Turkey's founder, Mustafa Kemal Atatürk. The event was organized by the CHP's Istanbul branch and attended by Group Deputy Chairman Engin Altay, CHP Istanbul Chairman Oğuz Kaan Salıcı, and numerous deputies and local citizens.

The party has said that they plan to repeat the event on the occasion of Atatürk's death, which has received harsh criticism from the party's secular base for defying the secular ideals of the party. Aysever condemned the CHP for organizing the event on his Twitter account and claimed CHP supporters want secular, democratic and progressive political initiatives from the party. "Enough is enough with backwardness, right-wing politics and religion!" Aysever posted, calling the CHP to side and cooperate with socialists. He also argued that the CHP's attempts to resemble the AK Party are "suicide" for the party and highlighted the need for urgent transformation within the party.

Political analysts claim the CHP started nominating politicians from the right to attract more votes. They suggest that tensions surged when the party cooperated with the controversial Gülen Movement during the presidential election and nominated Ekmeleddin İhsanoğlu as a joint candidate with the Nationalist Movement Party (MHP), a move that also ended with failure.

Following deputy Emine Ülker Tarhan's resignation from the CHP a few weeks ago, other deputies have announced that they also stand against the current policies of the party while Mehmet Bekaroğlu – formerly a member of the far-right Felicity Party (SP) who transferred to the CHP and was included in the Party Assembly through the "gender quota" within the party – claimed that Tarhan's resignation will not weaken the party but strengthen it. Other deputies have responded to Bekaroğlu's statements and criticized him for changing the party's dynamics despite the fact that he is a newcomer. Adana Deputy Ümit Özgümüş on his Twitter account said that Bekaroğlu is the last person to speak about internal dispute within the CHP and Uşak Deputy Dilek Akagün said the resignation of real CHP supporters would not strengthen the party, but the resignation of newcomers who joined the party and trying to transform it would strengthen it.