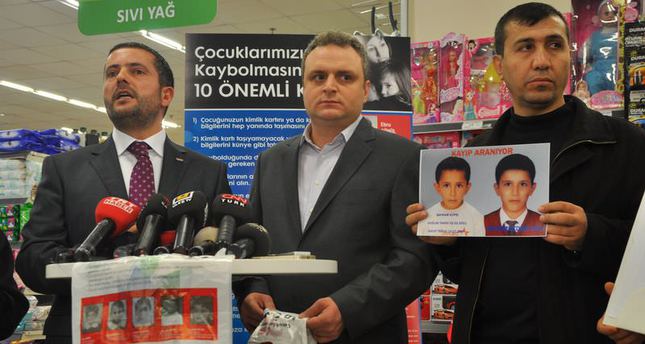 by AA
Nov 11, 2014 12:00 am
Branches of supermarket chain Onur in Istanbul and the northwestern Turkish provinces of Tekirdağ, Edirne and Kırklareli will deliver goods to customers in bags with photos of five missing children and an advisory to parents to prevent their children from fleeing home.

Zafer Özbilici, the head of the Association of Families with Missing Relatives (YAKAD), told reporters that the project is among their efforts to help locate the children and they have 3 million plastic bags imprinted with photos and the advisory message. He said that the bags will be available in 76 supermarkets in four cities. Özbilici noted that their association had managed to locate some 1,500 missing people out of 4,500 applications to them by families of the missing people.

Cemal Özen, a senior executive of the supermarket chain said that they would also contribute to the project by raising awareness about the issue of missing children on their websites and through social media.

Though no concrete figures are available regarding the number of missing children, it is estimated that over 3,000 children remain missing as of 2014 including those who were reported missing in past years.

Turkish police recently introduced a new project to locate missing children similar to the U.S. Amber Alert system. A text message is sent to cellphone users in an area where the missing person was last seen, and then the message gives a detailed description of the missing person accompanied by a photo of him or her.