Turkey to monitor the situation in Crimea 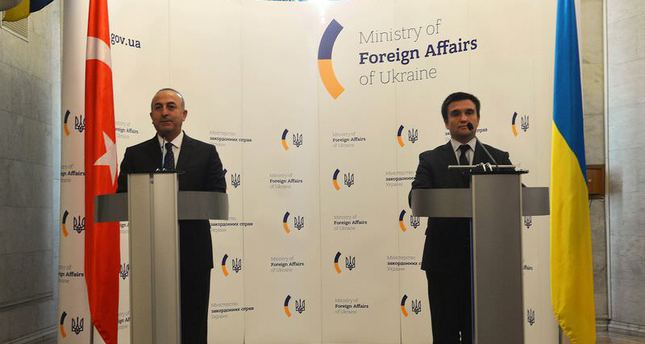 by AA
Nov 11, 2014 12:00 am
Turkey is planning to send an unofficial delegation to inspect the situation of Crimean Tatars in the Russian-annexed peninsula, Turkish Foreign Minister Mevlüt Çavuşoğlu said on Monday.

"Turkey is closely following the situation of Crimean Tatars who are unfortunately being repressed by a de facto administration," Çavuşoğlu said at a joint press conference with his Ukrainian counterpart, Pavlo Klimkin, after attending a Turkey-Ukraine Joint Strategic Planning Group meeting in Kiev.

Ukraine's Crimean Tatars make up roughly 13 percent of the Crimean population. The peninsula opted for annexation with Russia in a referendum on March 16, a vote not recognized by Kiev and Western powers.

The minister also reiterated Turkey's support for Ukraine's territorial integrity, including Crimea, and thanked Kiev for the support it had extended to Crimean Tatars.

"Turkey has always supported Ukraine's sovereignty and territorial integrity," Klimkin said, thanking Çavuşoğlu for backing Ukrainian president Petro Poroshenko's peace plan to resolve the situation in the eastern part of the country, where the conflict between government forces and pro-Russian separatists has escalated.

Çavuşoğlu called for a direct dialogue between Moscow and Kiev, which should be strengthened on the basis of a permanent cease-fire, in line with the Minsk agreement of Sept. 5.

The agreement, which was signed after extensive talks between Russia, Ukraine and pro-Russian separatists under the auspices of the Organization for Security and Co-operation in Europe (OSCE), implemented an immediate cease-fire that failed to stop fighting in the eastern regions of the country.

The stalemate in Ukraine between the government and the separatists has left more than 4,000 dead and over 9,000 others wounded since April.

During his visit in Kiev, Çavuşoğlu was also received by Ukraine's President Petro Poroshenko, who called on Turkey to enhance cooperation for the protection of the Crimean Tatars' rights, according to a statement issued by the Ukrainian Presidency on Monday.

Poroshenko said that leaders of the Crimean Tatars, Mustafa Dzhemilev and Refat Chubarov, were still not allowed to enter Crimea.

He also expressed hope that Turkey would support "the international position on the reaction to Russia's violation of its international obligations in the sphere of human rights."

Poroshenko thanked Turkey for supporting Ukraine's territorial integrity and said that Ukraine was developing a strategy to reintegrate the occupied territories.

"This includes creating a free trade zone and holding local elections. We expect our international partners to support this strategy," the president said.

Çavuşoğlu and Poroshenko also agreed that the next session of the Ukrainian-Turkish High Level Strategic Council would be held in Kiev at the beginning of 2015 with the participation of Poroshenko and Turkish President Recep Tayyip Erdoğan.

"Turkey is also ready to attend the conference of donors and investors for Ukraine at the beginning of next year," Çavuşoğlu said.

The minister also met Crimean Tatar leaders Dzhemilev and Chubarov; head of the Ahiskan Turks Society in Ukraine, Marat Resuloglu, and visited the OSCE mission in Ukraine, which is led by Turkish Ambassador Ertuğrul Apakan.